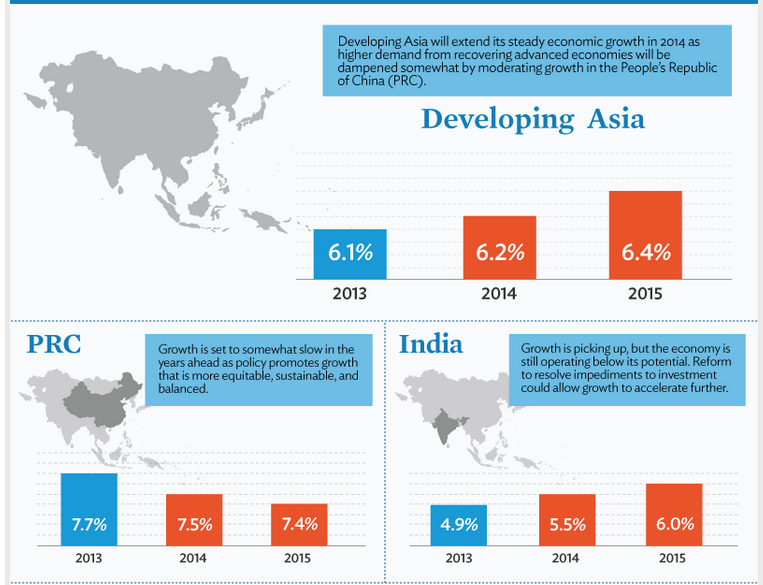 Developing Asia will extend its steady economic growth in 2014 as higher demand from recovering advanced economies will be dampened somewhat by moderating growth in the People’s Republic of China (PRC), says a new Asian Development Bank (ADB) report.

Developing Asia will extend its steady economic growth in 2014 says a news ADB report, but Thailand could drag behind with a growth under 3% as political crisis lingers.

Thaland GDP could stall below 2% if the political crisis lingers

The Asian Development Bank (ADB) has forecast Thailand’s GDP growth at 2.9 per cent this year in light of the political impasse.

Luxmon Attapich, ADB senior economist, said yesterday that the initial predicted growth at 4.5 per cent was lowered to the same as last year based on the assumption that the new government will take office and work in full force in the second half of the year.

GDP will plunge below 2 per cent if the administrative vacuum continues until the third quarter, she said, adding that the political stalemate has diminished confidence among tourists, consumers and the private sector, affecting consumption and investment.

“Developing Asia is successfully navigating a challenging global economic landscape and is well positioned to grow steadily over the next two years,”

“Risks to the outlook have eased compared to the recent past, and policy makers in the region can manage them. At the same time, countries should continue to make every effort to pursue sound macroeconomic policies and needed structural reforms.”

Two broad trends shape the outlook. Demand for Asia’s output is expected to grow as the recovery in the major industrial economies gains momentum.

The improvement in demand will be offset somewhat by moderating growth in the PRC where the economy slowed to 7.7% in 2013 on impacts from tightened credit growth, pared industrial overcapacity, deepening local government debt, rising wages, currency appreciation, and the continuing shift in the government’s development priorities away from quantity toward quality.

Growth patterns in Southeast Asia will be dominated by country factors

Subregional GDP decelerated to 5.0% in 2013 as soft export markets and slowdowns affected Indonesia, Thailand, and Malaysia. Growth in Indonesia, the biggest of these economies, was dampened by policies the government adopted to subdue inflation after it sharply raised fuel prices. Subregional growth is forecast to be similar in 2014, as gains from better export markets are offset by moderating domestic demand.

The outlook improves to 5.4% in 2015, with growth picking up in Indonesia after inflation ebbs, and Thailand’s economy rebounding if political disruption recedes.