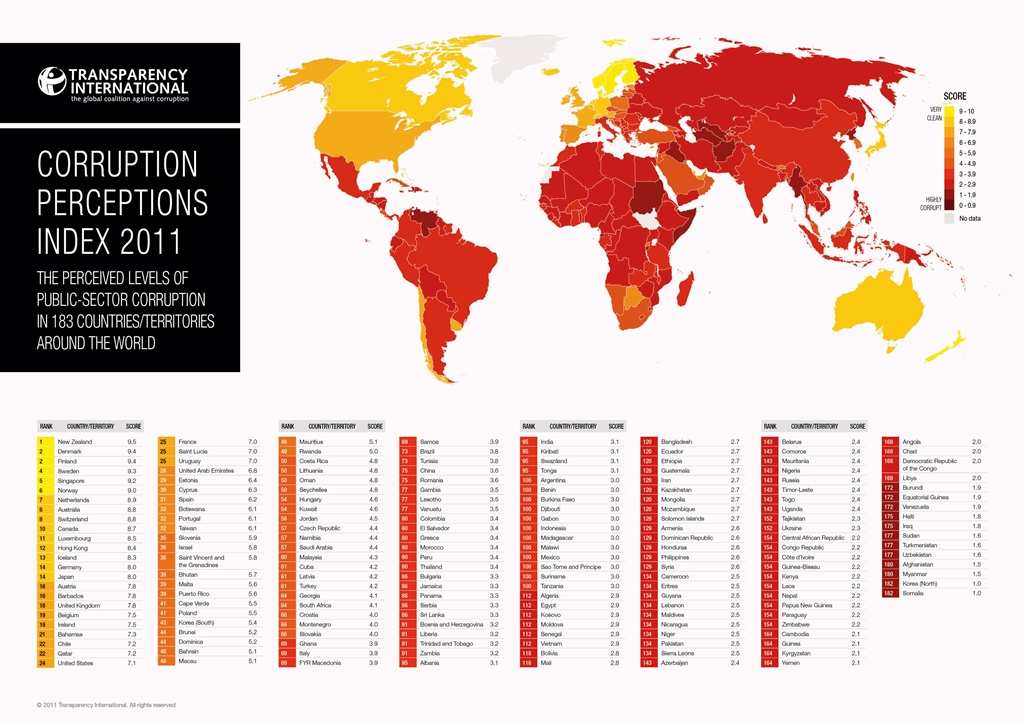 Not surprisingly, corruption is often cited as one of the biggest problem in Thailand. Thai governments, regardless of their shirt color, regularly put “fight against corruption” on their agenda. But very little is really enforced to  make Thailand more corruption resistant.

As corruption is so prevalent, Thailand needs to strengthen both state institutions in charge of crushing corruption from the top as well as to multiply and strengthen civic corruption watchdogs. But none of these strategy will have reasonable chances to succeed unless basic improvements are made in the legal and economic framework.

Political Having looked at some of the ways in which corruption damages the social and institutional fabric of a country, it is now necessary to turn to reform options open to governments to reduce corruption and mitigate its effects.

Rose-Ackerman (1998) recommends a two-pronged strategy aimed at increasing the benefits of being honest and the costs of being corrupt, a sensible combination of reward and punishment as the driving force of reforms. This is a vast subject. We discuss below six complementary approaches.

Whether civil servants are appropriately compensated or grossly underpaid will clearly affect motivation and incentives. If public sector wages are too low, employees may find themselves under pressure to supplement their incomes in “unofficial” ways. Van Rijckeghem and Weder (2001) did some empirical work showing that in a sample of less developed countries, there is an inverse relationship between the level of public sector wages and the incidence of corruption.

Subsidies, tax exemptions, public procurement of goods and services, soft credits, extra-budgetary funds under the control of politicians—all are elements of the various ways in which governments manage public resources. Governments collect taxes, tap the capital markets to raise money, receive foreign aid and develop mechanisms to allocate these resources to satisfy a multiplicity of needs. Some countries do this in ways that are relatively transparent and make efforts to ensure that resources will be used in the public interest.

The more open and transparent the process, the less opportunity it will provide for malfeasance and abuse

Collier (2007) provides persuasive evidence on the negative impact of ineffective systems of budget control. Countries where citizens are able to scrutinize government activities and debate the merits of various public policies also makes a difference. In this respect, press freedoms and levels of literacy will, likewise, shape in important ways the context for reforms. Whether the country has an active civil society, with a culture of participation could be an important ingredient supporting various strategies aimed at reducing corruption.

New Zealand, which is consistently one of the top performers in Transparency International’s Corruption Perceptions Index, is a pioneer in creating transparent budget processes, having approved in 1994 the Fiscal Responsibility Act, providing a legal framework for transparent management of public resources.

The high correlation between the incidence of corruption and the extent of bureaucratic red tape as captured, for instance, by the Doing Business indicators suggests the desirability of eliminating as many needless regulations while safeguarding the essential regulatory functions of the state. The sorts of regulations that are on the books of many countries—to open up a new business, to register property, to engage in international trade, and a plethora of other certifications and licenses—are sometimes not only extremely burdensome but governments have often not paused to examine whether the purpose for which they were introduced is at all relevant to the needs of the present. Rose-Ackerman (1998) suggests that “the most obvious approach is simply to eliminate laws and programs that breed corruption.”

Subsidies are another example of how government policy can distort incentives and create opportunities for corruption. According to an IMF study (2013), consumer subsidies for energy products amount to some $1.9 trillion per year, equivalent to about 2.5 percent of global GDP or 8 percent of government revenues. These subsidies are very regressively distributed, with over 60 percent of total benefits accruing to the richest 20 percent of households, in the case of gasoline. Removing them could result in a significant reduction in CO2 emissions and generate other positive spillover effects.

Subsidies often lead to smuggling, to shortages, and to the emergence of black markets

Putting aside the issue of the opportunity costs (how many schools could be built with the cost of one year’s energy subsidy?), and the environmental implications associated with artificially low prices, subsidies can often put the government at the center of corruption-generating schemes. Much better to replace expensive, regressive subsidies with targeted cash transfers.

Because in a globalized economy corruption increasingly has a cross-border dimension, the international legal framework for corruption control is a key element among the options open to governments. This framework has improved significantly over the past decade. In addition to the OECD’s Anti-Bribery Convention, in 2005 the UN Convention Against Corruption (UNCAC) entered into force, and by late 2013 had been ratified by the vast majority of its 140 signatories.

The UNCAC is a promising instrument because it creates a global framework involving developed and developing nations and covers a broad range of subjects, including domestic and foreign corruption, extortion, preventive measures, anti-money laundering provisions, conflict of interest laws, means to recover illicit funds deposited by officials in offshore banks, among others. Since the UN has no enforcement powers, the effectiveness of the Convention as a tool to deter corruption will very much depend on the establishment of adequate national monitoring mechanisms to assess government compliance.

Others (Heinemann and Heimann (2006)) have argued that a more workable approach in the fight against corruption may consist of more robust implementation of the anticorruption laws in the 40 states that have signed the OECD’s AntiBribery Convention.

Governments will need to be more pro-active in cracking down on OECD companies that continue to bribe foreign officials. In their efforts to protect the commercial interests of national companies, governments have at times been tempted to shield companies from the need to comply with anticorruption laws, in a misguided attempt not to undermine their position vis-à-vis competitors in other countries. Trade promotion should not be seen to trump corruption control. Governments continue to be afflicted by double standards, criminalizing bribery at home but often looking the other way when bribery involves foreign officials in non-OECD countries.

Just as government-induced distortions provide many opportunities for corruption, it is also the case that frequent, direct contact between government officials and citizens can open the way for illicit transactions. One way to address this problem is to use readily available technologies to encourage more of an arms-length relationship between officials and civil society; in this respect the Internet has been proved to be an effective tool to reduce corruption (Andersen et al., 2011).

In some countries the use of online platforms to facilitate the government’s interactions with civil society and the business community has been particularly successful in the areas of tax collection, public procurement, and red tape.

Purchases of goods and services by the state can be sizable, in most countries somewhere between 5-10 percent of GDP. Because the awarding of contracts can involve a measure of bureaucratic discretion, and because most countries have long histories of graft, kickbacks, and collusion in public procurement, more and more countries have opted for procedures that guarantee adequate levels of openness, competition, a level playing field for suppliers, fairly clear bidding procedures, and so on.

Chile is one country that has used the latest technologies to create one of the world’s most transparent public procurement systems in the world. ChileCompra was launched in 2003, and is a public electronic system for purchasing and hiring, based on an Internet platform. It has earned a worldwide reputation for excellence, transparency and efficiency. It serves companies, public organizations as well as individual citizens, and is by far the largest business-to-business site in the country, involving 850 purchasing organizations. In 2012 users completed 2.1 million purchases issuing invoices totaling US$9.1 billion. It has also been a catalyst for the use of the Internet throughout the country.