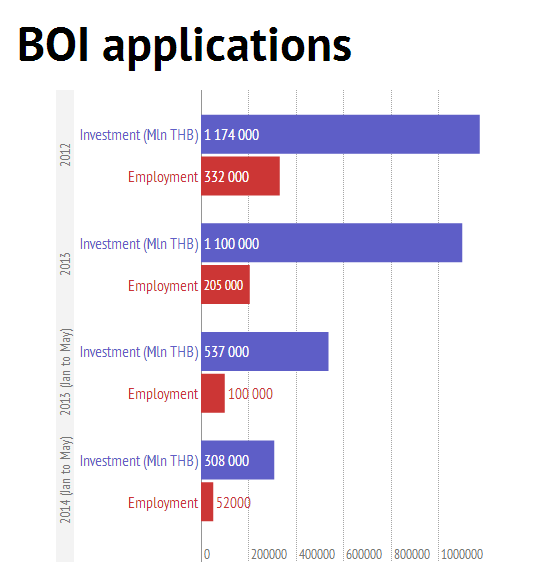 Months of political discord, street violence and widespread demonstrations,  have inflicted serious damages to Southeast Asia’s second-largest economy. But for now most businessmen agree the army takeover could help the country rebound to the economic potential it wields.

The economy sank 2.1 percent in the first quarter of 2014 and it’s now teetering on the brink of a recession.  According to the semi-annual “Global Economic Prospects” report released on Tuesday, Thailand’s economic growth outlook remains uncertain due to continued political tensions, while global growth is also showing signs of slowdown.

The forecast for Thailand’s economic growth has been slashed to 2.5 per cent from 3 per cent in April.

In an apparent effort to boost consumption and growth, the military has begun compensating 800,000 rice farmers left in limbo by the former government subsidy scheme. Yingluck Shinawatra’s government paid farmers about 40 percent above market value for their rice crop, but mismanagement and alleged corruption led the scheme to bankruptcy, and payments were halted late last year.

Although the Joint Foreign Chambers of Commerce in Thailand (JFCCT) have agreed that the business ambience in Thailand has not changed significantly since the establishment of the National Council for Peace and Order (NCPO), foreign investors have delayed their applications at the BOI, adopting a wait and see attitude.

The value of projects seeking privileges from the Board of Investment during the first five months of this year shrank 42 per cent to a total of Bt308.3 billion, according to the BOI.

The secretary-general of Thailand’s investment-promotion agency, Udom Wongviwatchai, said there were a total of 515 projects submitted to the BOI from January to May, a decrease of 39 per cent from the same period last year.

In a press confidence on “Confidence in Thailand” at Grand Hyatt Erawan Bangkok on 10 June 2014, JFCCT expressed opinions of the foreign business community in Thailand on trade and investment in the country during the current situation.

I have been in Thailand for 30 years, and my experience is that Thai economy usually recovers very fast. In 1997 Thailand was bankrupt, like all of us with the Tom Yam Kung crisis. Then in 2011 my factory was flooded for 40 days, but we managed to recover in 60 days. Thailand is very resilient : if it goes down 10%, then it will go up 15%.

For the car industry, there is always some changes, but it has always improved in the long term, and now Thailand has become the most competitive automaker in the Asean. There is always an infrastructure behind the politics that makes business proper.

As far as I know, there are no foreign automobile operators moving their operations elsewhere : we still have many Chinese company visiting us.

For the time being, Thai military still enjoy positive feedback from the business sector and rice farmers, but Thailand is also the target of criticism from the United States, and many other Western countries.

In a globalized world economy, where Thailand depends heavily on its exports and foreign investment, the country cannot afford to postpone a return to democracy for too long. From the international community point of view, only an elected government is legitimate.