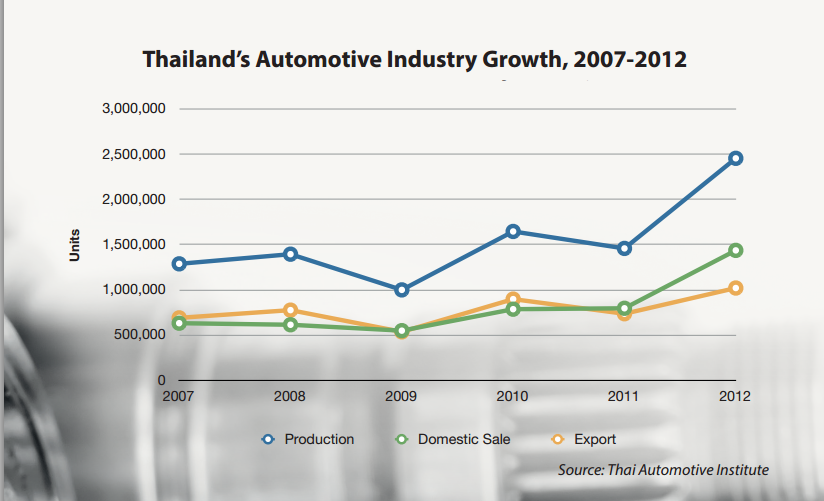 The Federation of Thai Industries (FTI) has reported that Thailand produced 1.88 million cars in 2014, lower than a target of 2.1 million cars.

Vice President and Spokesman of the FTI’s auto industry group Suraphong Phaisitphatthanaphong said the number of cars manufactured in Thailand last year stood at 1.88 million units, decreasing from the same period of 2013 by 23.49% and the target of 2.1 million units.

A 33.7% drop in car sales in the country was the main cause of the lower production in 2014. Other factors affecting Thailand’s car production last year included an economic slowdown, delayed budget disbursement of the government and produce price drop, said the vice president.

Three years ago, passenger-car sales boasted a remarkable growth. This was largely due to Thailand’s first-car-buyer programme that offered excise rebates of up to 100,000 baht per vehicle. Some 1.4 million vehicles were sold in 2012.

But sales quickly dropped in 2013 to 1.33 million vehicles. In 2014, political uncertainty under the military-led government and banks’ unwillingness to approve car loan applications resulted in a major slump in the domestic market.

“Although there may be demand, many of the potential buyers are not being approved for auto loans because finance companies are becoming stricter in their approval process,”

Wallop Treererkngam, general manager for marketing at Suzuki Motor (Thailand), was quoted as saying by The Nation.

Thailand’s automotive industry has been continually developing for over 50 years with strong support from both the public and private sectors. Thailand has been the automotive hub of ASEAN, with the largest automotive production among Southeast Asian countries, ranking ninth globally in 2012.

The government coordinated with the private sector to formulate the Master Plan for Automotive Industry (2012-2016) to develop Thailand as a global green automotive production base and to increase research and development for automotive technology.

Thailand has approximately 709 Tier 1 auto parts suppliers and 1,700 Tier 2 and 3 suppliers. More than half of the Tier 1 suppliers are car part companies.

How Effective Is Your Business Communication Skill?