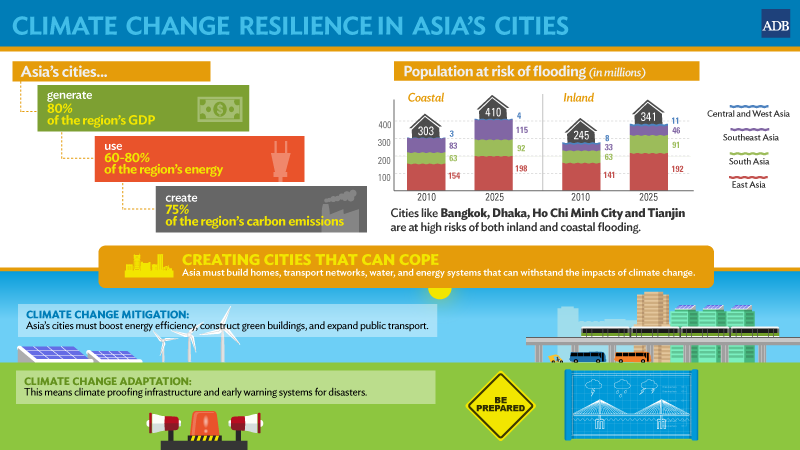 The battle against climate change is likely to be won or lost in Asia’s expanding megacities. Asian cities are poised to contribute more than half the rise in global greenhouse gas emissions over the next 20 years if no action is taken.

Bangkok, Dhaka, Guangzhou, Ho Chi Minh City, Kolkata, Manila, Mumbai, Shanghai, and Yangon have one thing in common. These low-lying or coastal cities are all highly vulnerable to rising sea levels, floods, and other impacts of climate change.

Major urban areas in the Pacific are at higher risk still. However, even inland cities in the region could be suddenly devastated by sudden extreme weather events like typhoons, or suffer rising temperatures and increasingly uncertain weather that damages infrastructure and livelihoods.

Cities are the centers of economic growth in Asia and the Pacific, generating 80% of  gross domestic product in most countries.  Approximately 1.2 billion Asians will move to cities over the next 35 years requiring the construction of swathes of new homes, roads, and water and electricity networks.

City leaders need to make sure existing and future infrastructure can cope with increasingly frequent disasters like Typhoon Ketsana, which killed hundreds and caused an estimated $100 million in damage in the Philippines in 2009, or Cyclone Pam in March 2015, which flattened 90% of houses and destroyed critical water and food supplies in Vanuatu’s capital Port Vila and beyond.

Source: Asia’s Booming Cities Most At Risk from Climate Change

Related Topics:bangkokclimateglobal warming
Up Next

Is “Teflon Thailand” Running out of Steam ?