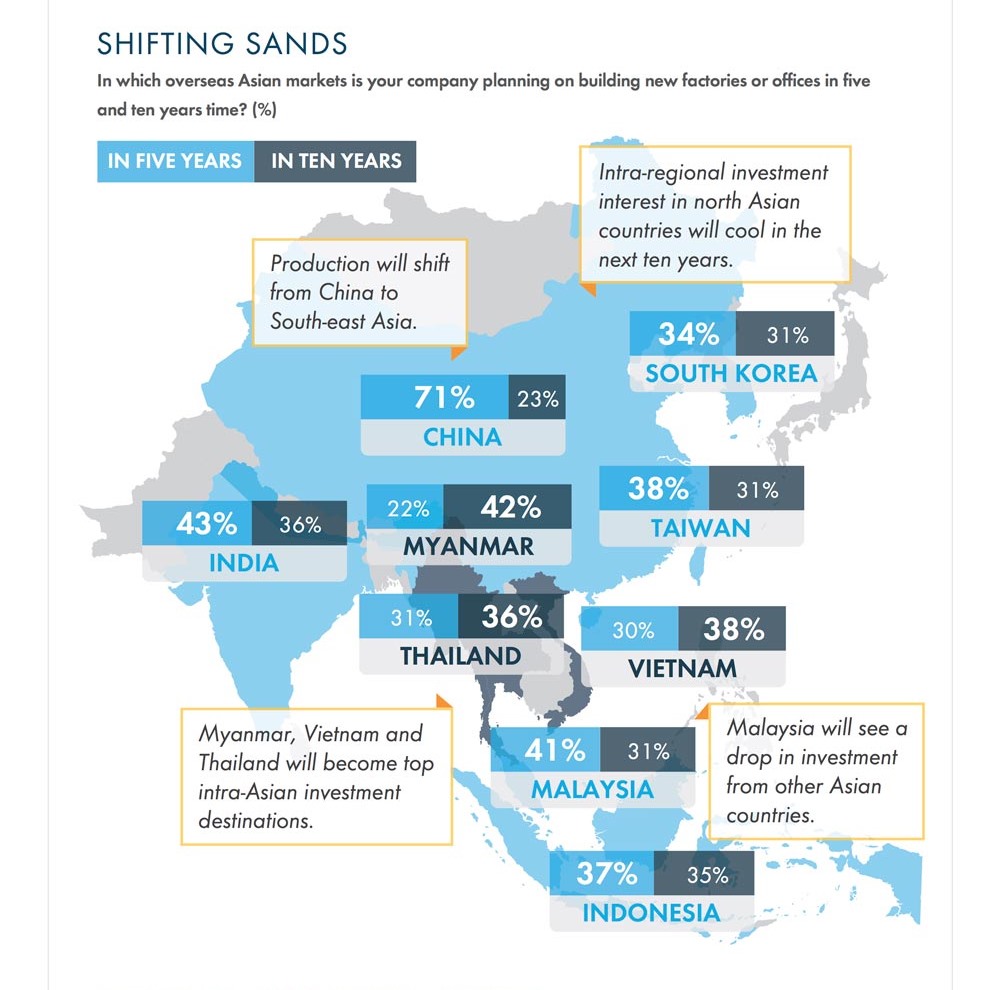 According to a new EIU report, Asia will focus more on opening new factories and offices in Southeast Asia and less on China in the next ten years.

At first glance, Asia may seem perfect for itself. It is the factory floor of the world, producing nearly half of the world’s manufactured goods. End markets are increasingly no longer half a world away. By 2030, Asia will be home to 66% of the global middle-class population and 59% of middle-class consumption, compared to 28% and 23%, respectively in 2009, according to the OECD.

However, statistics such as these do not always provide a clear view of conditions on the ground. There are realities that make economic integration in Asia challenging. Despite some progress at the sub-regional level with initiatives such as the Association of South-east Asian Nations (ASEAN), broader multilateral trade and investment arrangements have faced obstacles such as nationalism and disparate regulatory standards.

The business landscape in Asia will change significantly over the next decade, as companies in the region focus more on new growth opportunities in countries such as Myanmar, Vietnam and Thailand, and less on China, says a new report from the EIU.

The report, integrAsian: How Asia’s economic ties are changing the business landscape, sponsored by ANZ Bank, is based on a survey of 525 Senior Executives in seven key markets in Asia and includes case studies from the energy, manufacturing and technology sectors. The report examines how companies in the region are adapting their business strategies to stronger intra-Asian trade and investment links.

Rising labour costs in China have been widely cited as a factor driving manufacturers to consider moving production to countries in the Mekong delta. The study shows that the services sector is also keen on expanding in Southeast Asia. In both the financial services and professional services industries half of the survey respondents say they are planning to open new offices in Myanmar in the next decade.

In the next five years, Asian companies are primarily targeting China, India and Malaysia to open new offices or to build factories. In the next ten years, they will focus much more on Myanmar, Vietnam and Thailand.

71 percent of respondents say they are planning to build a new factory or office in China in five years, only 23 percent will do so in ten years.

Firms targeting Myanmar for expansion will nearly double from 22 percent in five years to just short of half in ten years. Similarly, companies planning to expand in Vietnam and Thailand over the next five and ten years will respectively increase from 30-38 percent and 31-36 percent.

Despite reduced new investment interest beyond the next five years, China’s importance as one of the drivers of the region’s economy will not diminish.

Companies in China are poised to take advantage of growing trade links with other parts of Asia, and 41 percent of Chinese firms say they have already adopted a single sales strategy for the entire region.

In addition, nearly one of every five respondents says they will use the renminbi to settle 20-50 percent of their payments and invoicing over the next five years, second only to the US dollar.

The report integrAsian: How Asia’s economic ties are changing the business landscape is available to download here, or visit integrAsian.economist.com for more information.