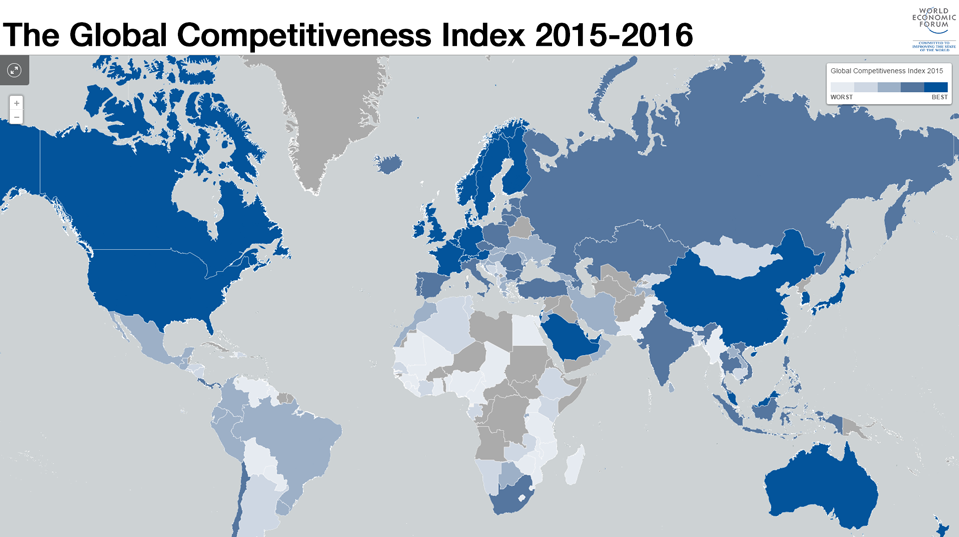 Thailand’s competitiveness ranking fell to 32nd in the World Economic Forum’s 2015-16 index, and is only 10th among other economies in Asia-Pacific.

The most competitive economies in the Asia-Pacific region are holding steady in this year’s Global Competitiveness Index: five of the region’s top ten occupy exactly the same position as in last year’s overall Index, while two have dropped a single place and three have moved forwards.

It is worth noting that among Asean countries only Thailand (-1) and Indonesia (-3) are moving down the scale. Vietnam, probably Thailand’s main competitor for FDI, is moving up 12 ranks in 2015.

In the lower reaches of the overall Index, too, more of the region’s economies are advancing than regressing – there are year-on-year advances for Lao PDR (83rd of the 140 economies analysed), Cambodia (90th), Nepal (100th), Bangladesh (107th) and Myanmar (131st), with only Mongolia (104th) and Bhutan (105th) regressing.

Among emerging and developing Asian economies, the competitiveness trends are mostly positive, despite the many challenges and profound intra-regional disparities. While China and most of the South-East Asian countries performing well, the South Asian countries and Mongolia (104th) continue to lag behind.

The five largest members of the Association of Southeast Asian Nations (ASEAN) – Malaysia (18th, up two), Thailand (32nd, down one), Indonesia (37th, down three), the Philippines (47th, up five) and Vietnam (56th, up 12) – all rank in the top half of the overall GCI rankings.

Having jumped six places in the last Index, Thailand drops a place to 32nd overall this year. It has improved in the last year on technological readiness, innovation and business sophistication but slipped on the macroeconomic environment pillar, reflecting a lower credit rating and worsening government budget balance.

Singapore. For the fifth year in a row, Singapore is both the top Asia-Pacific nation and second only to Switzerland in the overall rankings. With a consistently good performance – it ranks in the top two in seven out of the 12 pillars – the country’s strengths include the efficiency of its goods, labour, and financial markets, and its globally top-ranked higher education and training system.