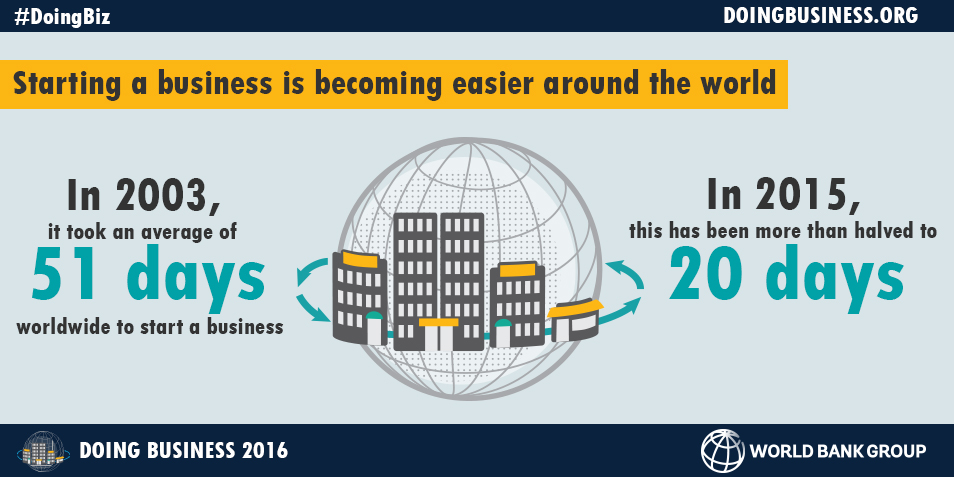 Thailand barely made it among the World Bank’s top 50 economies worldwide, and has ranked third among Asean countries on the ease of doing business during the past year.

In its annual Doing Business 2016: Measureing Quality and Efficiency survey, Thailand fell three places from the bank’s 2014 survey to 49th out of 189 economies surveyed.

In the Asean region, the kingdom is placed behind Singapore and Malaysia, with Singapore retaining the world’s top ranking for the 10th consecutive year.

Reform activity continued apace in East Asia and the Pacific, with more than half of the region’s 25 economies implementing a total of 27 reforms in the past year.

For Thailand, the period for starting up a business is 27 days, while the average time to start a business in 132 economies worldwide is less than 20 days.

What are the ranking trends?

Economies in East Asia and the Pacific have an average ranking on the ease of doing business of 96.

• Singapore remains at the top of the global ranking. Also among the top performers worldwide are Hong Kong SAR, China (at 5 in the ranking); Taiwan, China (11); and Malaysia (18).

• The region’s economies perform well on average in Dealing with Construction Permits (with an average ranking of 78) and Getting Credit (80).

• The region performs below the global average in Resolving Insolvency (with an average ranking of 106), Enforcing Contracts (104), Starting a Business (103), Protecting Minority Investors (102), and Registering Property (98).

Registering a property transfer in the region takes 74 days on average, compared with a global average of 48 days, and 57 days in Thailand.

Completing the formalities to build a warehouse takes 135 days on average in the region, compared with a global average of 160 days.

The largest number of reforms recorded in the past year was in the area of starting a business. Myanmar made the most improvement globally by eliminating the minimum capital requirement for local companies and by streamlining incorporation procedures, helping small enterprises save valuable time and resources.

“Thailand is an attractive place to do business for Thai and foreign investors,” said Ulrich Zachau, World Bank country director for Thailand.

“In the future, Thailand will have the opportunity to improve its business environment through reforms such as improving the quality of land administration index by digitising and publishing the land registry.”

The bank said the majority of economies in East Asia and the Pacific regions are undertaking reforms to further improve the regulatory environment for small and medium-sized enterprises. During the past year, 52% of the region’s 25 economies implemented 27 reforms to make it easier to do business.

What are the reform trends?

• Thirteen of 25 economies in East Asia and the Pacific (52 percent) implemented at least one reform making it easier to do business in the past year, 27 in total—up from the previous year.

• Among the reforms implemented in the region, the highest numbers were in Starting a Business (8) and Paying Taxes (6). No reforms were recorded in Dealing with Construction Permits, Protecting Minority Investors, or Enforcing Contracts.

• Vietnam implemented the most reforms in the region, with 5, followed by Hong Kong SAR, China (4); and Indonesia (3).

Some details of these reforms: