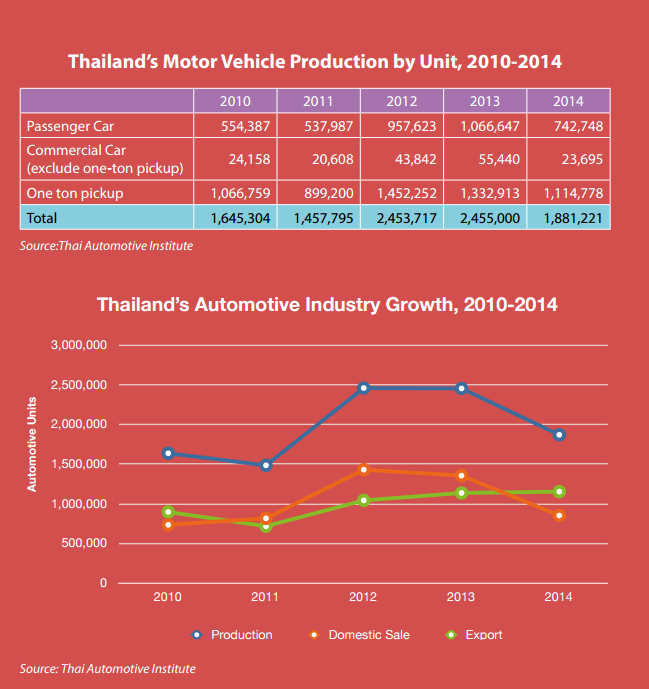 New vehicle sales in southeast Asia’s six largest markets expanded by 4.4% to 858,872 units in the fourth quarter of 2015, compared with 822,888 units in the same period of last year, according to compiled exclusively for just-auto by AsiaMotorBusiness.com.

Full-year sales were 3.9% lower at 3,079,678 units in 2015, however, compared with 3,203,256 units in the previous year, as economic growth in the region came under pressure from slowing domestic consumption, depressed commodity prices and weak exports.

The sales decline in the region’s largest market, Indonesia, slowed significantly in the fourth quarter – to just over 9% after an 18% drop the first nine months of the year. This reflects more than anything increasingly depressed year-earlier sales data, however.

The region’s second largest market, Thailand, expanded by 5.2% in the fourth quarter after declining by almost 15% in the first nine months of the year.

Buyers rushed into the market in the final months of the year ahead of scheduled increases in excise taxes on key models.

The industry remains downbeat about the market’s growth prospects this year, however, reflecting the sluggish domestic economy and the recent tax increases.

Malaysia’s new vehicle market expanded by over 4% in the fourth quarter, helping to reverse a moderate 1.4% decline in the first nine months of the year. Growth came against a backdrop of slowing domestic economic growth, however, and here too the industry expects a decline in sales in 2016 – albeit a moderate one.

The Thai new vehicle market expanded by 5.2% to 245,766 units in the fourth quarter of 2015, from depressed year-earlier sales of 233,716 units, according to data released by the Federation of Thai Industries (FTI).

Market activity increased ahead of the introduction of new excise taxes linked to emissions and fuel-efficiency at the end of 2015, affecting important segments of the market including pickup-based vehicles, SUVs and large cars.

Economic growth remained subdued for most of the year, with annual GDP growth at 2.9% in the third quarter – only slightly up on 2.8% in the second quarter and down from 3.0% in the first quarter.

Full year GDP growth is estimated at just over 3.0%, with economic activity estimated to have increased moderately in the fourth quarter – lifted by continued growth in tourism arrivals and rising private investment.

Domestic consumption remained sluggish, however, while exports are estimated to have declined by around 6% last year due to depressed commodity prices and lower demand in key markets.

Bank of Thailand expects GDP growth to be 3.5% in 2016, helped by further government stimulus measures and continued strong growth in tourism. It expects exports to remain flat, however, partly due to the growth slowdown in China.

The FTI expects the vehicle market to continue to decline in 2016, by up to 6% to 750,000 units, due to the sluggish domestic economy and the recent increases in excise taxes. Toyota is even more downbeat; it expects the market to drop by close to 10% to 720,000 units this year.

Europe and Thailand relations after the coup

Can ASEAN Learn from the European Union?