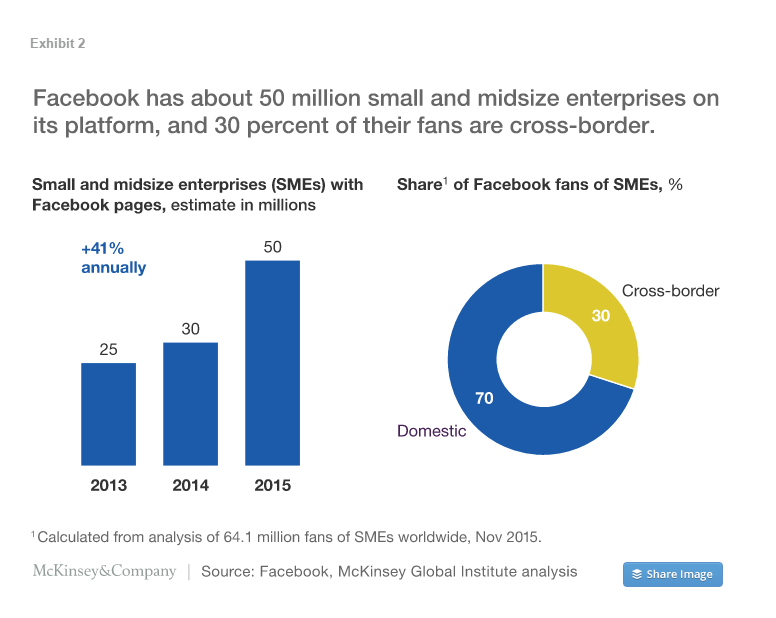 But now—thanks to digital platforms with global reach—artisans, entrepreneurs, app developers, freelancers, small businesses, and even individuals can participate directly.

New research from the McKinsey Global Institute (MGI) uses novel data to analyze the extent of the connections and their economic impact.

The biggest of these online platforms have grown to a scale never before seen, and their users are increasingly international.

Individuals from Canada to Cameroon can forge their own global connections, whether for business, personal ties, entertainment, education, or simple curiosity about the world beyond their own borders.

MGI analysis of international ties on Facebook, Twitter, LinkedIn, and WeChat shows that some 900 million people have at least one international connection on social-media platforms (even adjusting for overlap between their users).

More than 12 percent of Facebook friendships are between people living in different countries, and half of active Facebook users have at least one cross-border friend—a threefold increase from 2014.

“Southeast Asia is a dynamic mobile first region, and the fastest growing for Facebook. Connecting the more than 241 million people in Southeast Asia to the friends and family, businesses and moments that matter to them is at the core of everything we do. We are committed to investing in resources and expertise to help our partners in Southeast Asia grow and achieve measurable business results,”

People in SEA are actively engaged with the businesses on Facebook that matter to them.

Facebook recently announced a new milestone with 3 million active advertisers on Facebook, a number that has grown 50% in one year. A large part of that growth is being driven by advertisers in SEA who are moving beyond traditional advertising channels to reach the region’s mobile first consumers.
Source: Globalization for the little guy | McKinsey & Company