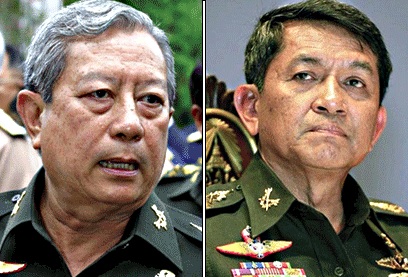 It has been three years since the enactment of Thailand’s controversial Computer Crime Act, a law that critics and experts say has had a troubling and detrimental impact on free expression in the country.

The law was introduced in 2007 under the post-coup government of General Surayudh Chulanont. In that context it was immediately assailed as a political weapon by critics who claimed that the legislation was passed to stifle online discussions and criticism of the coup that ousted former Prime Minister Thaksin Shinawatra, as well as to head off debates about the roles and influence of the military and the monarchy in the Kingdom’s realities.

Beyond the realities and rationale behind its enactment, however, the Computer Crime Act has been criticized for its vague provisions and harsh penalties. The law empowers authorities to block or shut down websites deemed as harmful by the State, and it can also mete out prison terms over disputed news, commentary, and information disseminated online, and thus have a chilling effect on people’s behavior and discussions over the Internet.

The crimes that this law addresses can be divided along two lines. The first deals with conventional crimes committed online, like illegal access to data, hacking, spamming, and others.

It is the second set of defined crimes that has become controversial. According to a legal analysis report prepared by Thai media lawyer Sinfah Tunsarawuth and international free expression expert Toby Mendel, the Computer Crime Act’s Sections 14 and 15, in particular, dealing as they do with matters of national security and lese majeste, are open to broad interpretations, and in any case compound already existing provisions in the Penal Code about the same issues.

Thailand's Computer Crime Act was introduced in 2007 under the post-coup government of General Surayudh Chulanont.

Because national security and lese majeste are broadly interpreted and applied, it has become too easy to invoke such accusations under the Computer Crime Act. Section 15, which broadens the definition of who is liable for online content to include Internet Service Providers (ISPs) themselves, also makes it too easy to cast the net of accusation too wide. These points, taken with harsher penalties prescribed by the Act relative to what already exists in the Penal Code, all come together to create an intimidating environment online, an environment that will tend to stifle free expression.

To be sure, Thai Internet advocates say, the ability to categorize “computer crimes” along the two lines above acknowledges how the Computer Crime Act had its genesis long before its passage in 2007. The first bill for such a law was filed years earlier, at a time when computer hacking and online pornography were the main issues associated with the Internet.

Subsequent political developments, including the military coup against the government of Thaksin, however, affected the ultimate passage of the law, the critics contend.

Vast powers to the Thai  autorities

In a seminar held by the Thai Netizens Network on 21 July 2010, representatives from both mainstream and online media, along with media activists, aired their criticisms of the law.

Media lawyer Tunsarawuth noted how authorities tasked to implement the law enjoy vast powers. Section 18 of the Computer Crime Act gives the authorities the power to investigate and gather evidence of an offense committed by or via computer. Data or traffic from any computer system suspected of being used for an offense can be copied, while computer data or computer systems can be accessed to gather evidence. Authorized officials can also demand for passwords and decode any person’s computer data, and seize or attach any computer system for up to 90 days as part of their investigation and gathering of evidence.

One problem, Sinfah said, is that the law does not stipulate how these powers are to be used, thus opening them to abuse. As stated in his and Mendel’s report: “The powers under Section 18 are set out in eight sub-sections, but the Act does not indicate how the competent officials should apply them. As a result, officials have the discretion to choose which procedure they wish to use, regardless of the impact this might have on the suspect. Officials, for example, can choose to seize an entire computer system or data storage device, rather than simply copying the data they want and returning the computer.” Clearly a case of overkill.

Meanwhile, the law also empowers the authorities to shut down a web site through a court order. But media advocates note that Thailand’s Constitution (Article 45) bars the closing down of media outlets. The Constitution clearly intended media outlets to include traditional forms of mass media, such as print and broadcasting. Critics of the Computer Crime Act said web-based outlets, too, should be accorded the same protection. Prasong Lertrattanawisut, president of the Thai Journalists Association (TJA), said there are matters concerning the shutting down of entire websites that must be submitted to the Constitutional Court for resolution.

As an example: Chiranuch Premchaiporn, executive director of the Prachatai.com website has been charged with 10 counts of violating Sections 14 and 15 of the Computer Crime Act, each one carrying a penalty of five years. Her supposed offense: Nothing she did or said or wrote herself. Instead, Chiranuch is accused of failing—as Prachatai webmaster—to take down from the Prachatai web board comments which the government deemed as insulting to the monarchy.

Chiranuch and Tunsarawuth say Section 15, which holds ISPs and webmasters accountable for every single comment posted on their sites, is problematic as it places unrealistic burdens on webmasters, ISPs, and non-editorial gatekeepers who have to contend with potentially hundreds if not thousands of lines of commentary daily, and ultimately would encourage censorship and self-censorship on many levels. Chiranuch’s Prachatai.com site, for example, has “voluntarily” decided to take down its online forums, in a surrender to the impossibility of policing every single item that passes through its boards.

To be sure, in Thailand the debate about free expression online comes with urgency as well as complications when seen against a backdrop of its on-going political conflicts.

The Red vs Yellow protests that have rocked Thailand over the past three years have created harsh, painful, and fiery rhetoric, propaganda, innuendo online, so much that they have often seemed to overwhelm genuine attempts by citizens, officials, and government critics to facilitate more sober, responsible debates.

In the middle of this tense atmosphere, the Thai government—invoking the Computer Crime Act as well as an emergency decree that has lasted for months—has shut down community radio stations, anti-government satellite TV operations, and, by the government’s own reckoning, more than 2,200 websites since May alone.

The Internet is impossible [for the government] to control.

Beyond the legal and political considerations, Sarinee Achavanuntakul, committee member of the Thai Netizen Network, says the Computer Crime Act and attempts to stifle discussion and debates online will only exacerbate a social crisis in Thailand.

Political analyst Suranan Vejjajiva likened attempts to block websites to book burnings of a bygone era. “But the world has changed,” he said. “The Internet is impossible [for the government] to control.”

The Internet is “an open system,” Sarinee added. “If it is blocked, the system will always find ways to get through.”

Kan Yuenyong, director of the Siam Intelligence Unit, a Bangkok-based think-tank, illustrated how users of a banned web board—and online forum—migrated over months to various other Internet forums.

SEAPA Executive Director Roby Alampay said that Kan’s illustrated migration shows how censorship and online suppression can be impossible to fully enforce, but it also showed how such enforcement needn’t be 100-percent efficient to damage society.

Alampay warned that depriving people of venues for legitimate debates and expression of public opinion would eventually cause “only the determined and technologically savvy ones” to persist in their discussions. Worse, suppression in the media—whether mainstream or online—might only engender radicalization and polarization of opinions, with each strain of political discourse being diverted to their own narrow and intolerant channels of discussion.

Sarinee said that by censoring the Internet, through laws like the Computer Crime Act and through methods like the blocking of web sites, the government will only cause large-scale damage in the future.