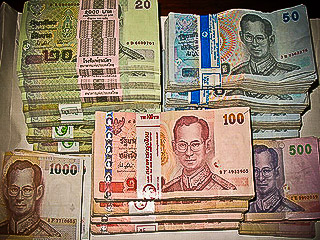 Business leaders Monday will discuss a radical government proposal to increase the daily minimum wage to 250 baht – 21 per cent higher than the current Bangkok rate of 206 baht. The minimum wage in Thailand is currently 206 baht per day in Bangkok and slightly less in the provinces. While not the lowest labor market in the region, Thailand’s workforce is among the most cost-efficient in the world

Prime Minister Abhisit Vejjajiva first floated the idea of a 250-baht minimum wage in June. In an address to Board of Trade members, he urged business leaders to think “out of the box” about ways to improve income distribution to promote social reconciliation.

His proposal will be debated Monday by the Joint Standing Committee on Commerce, Industry and Banking, which includes representatives from the Federation of Thai Industries (FTI), the Thai Chamber of Commerce and the Thai Bankers’ Association. Members hope to come up with a clear response to the government.

“This is because the government’s statement has caused confusion among business operators and might cause tremendous increases in their costs,” said FTI chairman Payungsak Chartsutthipol.

He said the FTI agreed that wages should increase but that the decision should rest with the tripartite Central Wage Committee, a group of government, employer and labour representatives that reviews rates every December.

“Increasing the minimum wage immediately to 250 baht per day is too high, and doing so might cause some provinces to increase wages by up to 100 baht, which will be a burden for business operators such as in Nan province, where the rate is 152 baht per day,” said Mr Payungsak.