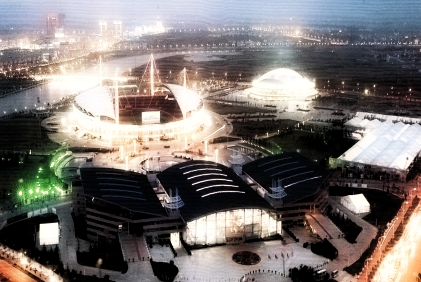 Chinese state media say work will begin this month on a massive trading complex in Bangkok where Chinese manufacturers will be able to re-export their goods.

The China Daily newspaper said Thursday that the China City Complex will cost $1.5 billion and sprawl over almost three-quarters of a square kilometer. Chinese manufacturers will be able to import goods to Thailand, taking advantage of a new free trade deal, and then ship to the United States and Europe under more advantageous quotas and tariffs.

China Daily says the complex will be modeled on the Yiwu International Trade City in eastern China, which is considered the world’s largest wholesale market for small products. The newspaper said Thailand’s deputy minister of commerce was in Yiwu this week seeking to attract investors.

China City Complex is one of the biggest cooperation projects between China and Thailand, corroborating a strategic business-partner relationship between the two countries," said Alongkorn Ponlaboot, Thailand's deputy-minister of commerce. China Daily says the complex is expected to attract more than 70,000 commercial tenants from China when it is completed in 2013.

“China City Complex is one of the biggest cooperation projects between China and Thailand, corroborating a strategic business-partner relationship between the two countries,”

said Alongkorn Ponlaboot, Thailand’s deputy-minister of commerce, on Wednesday, who had traveled to Yiwu to woo investors.

Construction of the commercial city, which will cover 700,000 square meters, is expected to be completed by 2013. It will attract more than 70,000 commercial tenants from China, according to Dong Hongqi, chairman of Yunnan-based Ashima Cultural Industry (Group) Investment Co Ltd, the Chinese partner in the project.

“Apart from the business opportunities in Thailand, Chinese exporters can also promote their products to developed markets such as the European Union and the United States through this project,”

Yang Fangshu, chairman of the ASEAN-China Economic and Trade Promotion Association, said, adding that Chinese investors enjoy bilateral trade with Thailand without the imposition of tariffs, and also low tariffs when trading with other developed economies.

Since the FTA was established in January 2010, most goods traded between China and ASEAN countries have been subject to zero or very low tariffs, thus allowing a freer flow of capital, resources, technology and talents.

However, China has been a major target of trade protectionism when trading with developed countries. In 2009, there were 127 cases filed by trade partners against China, the largest number ever.

“Thailand’s low tariff with developed economies is a big attraction for me, as our exports have been severely influenced by the high tariffs imposed by the EU and US this year,” Huang Ruineng, manager of Tiantian Jewelry Sales Department in Yiwu.

It’s part of a move to make the southeastern neighbor a re-export center to promote the country’s small-goods exports in a global market troubled by rising trade protectionism.

Yiwu is well known to the world for its large small commodity markets and tremendous goods. China Commodity Market is made up of three market groups, namely Huangyuan Market, Binwang Market and the International Trade Mart. Currently a total of 34,000 shops and booths covers a business area of 800,000 sqm with 320,000 kinds of commodities in over 1502 categories of 34 industries.

In 2003 the trade volume reached 24.827 billion Yuan and USD 1.5 billion. The foreign rate of the markets reached over 50%. And the market has become the largest circulation center, information center and export base of commodities in China. There are 80,000 business operators in the China Commodity Market. Every day the market visit reaches 200,000 person times.

Related Topics:free-tradeOBORone belt one road
Up Next