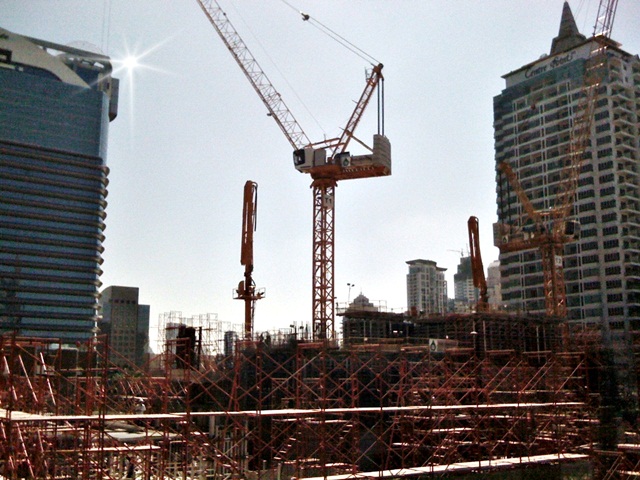 The Thai economy is expected to expand by 3.5-4 per cent in 2011, lower than the 3.5-4.5 per cent projected in May, according to the National Economic and Social Development Board (NESDB).

Thailand’s economy in this year’s second quarter grew by 2.6 per cent, decreasing from 3.2 per cent in the first quarter, NESDB Secretary General Arkhom Termpittayapaisith told a press briefing on Monday.

The falling performance figure was partly attributed to contractions in the manufacturing sector affected by Japan’s devastating earthquake and tsunami, and the subsequent contraction of the Japanese economy as well as reduction in total investment.

The Thai economy is expected to expand by 3.5-4 per cent in 2011, lower than the 3.5-4.5 per cent projected in May, according to the National Economic and Social Development Board (NESDB).

Consequently, the Thai economy grew by 2.9 per cent in the first half of 2011.

The adjustment was owing to the fluctuation of oil prices, the delay of government budget disbursements in 2012, risks on global economic recovery, particularly the higher risk of economic recession in the US and the continuing European public debt issues, and the risk of volatility related to the money market, the capital market and the foreign exchange rate.

In addition, the Thai baht tends to appreciate in the latter half due to depreciation of US dollar, according to the NESDB secretary general.

Thailand could see its economic growth slow to 4-4.5 per cent this year after its automotive sector was hit by supply-chain disruptions due to the earthquake and tsunami in Japan and the tightened monetary policy to curb inflation, according to the Asian Development Bank (ADB).

Growth in Thailand’s gross domestic product moderated to 3 per cent in the first quarter of 2011. The Manila-based bank forecasts growth of 4.5-5 per cent in 2012.

According to the July edition of its Asia Economic Monitor, Thailand, Malaysia and the Philippines are likely to see growth taper because of diminished export demand and tighter monetary policies. Indonesia stands to buck the trend, with strong domestic demand expected to drive GDP growth to 6.4 per cent in 2011, above the 6.1 per cent recorded last year.

After last year’s strong economic recovery, emerging East Asia will see growth moderate this year asauthorities continue to battle inflation amid anemic recovery and deleveraging in advanced economies, says the July issue of the Asia Economic Monitor. ADB forecasts aggregate GDP to rise a still robust 7.9% in 2011 and 7.7% in 2012. The report says rising inflation could bring wage-price spirals that could upset the region’s shift from crisis recovery to sustained economic growth.  The July AEM also suggests that a pragmatic approach to a range of policies may help governments manage the inflationary impact of sustained and volatile changes in commodity prices the ADB report said.

34% Jump in BOI Projects Exceed Projection. The Board of Investment yesterday reported better-than-expected first-half data, with applications for BoI privileges valued at 247 billion baht, up by 33.6% year-on-year.

The number of applications also increased by 43.2% to 882 projects.

The promising outlook has prompted the BoI to raise its full-year projection for application values to 500 billion baht.

Secretary-general Atchaka Sibunruang said applications had been rising steadily all year. June, with 180 projects worth 43.6 billion baht, is the biggest month so far thanks to increases in production capacity and investment by large businesses.

Foreign direct investment in the first six months amounted to 522 projects worth 167 billion baht, up from 375 projects worth 98.3 billion last year.