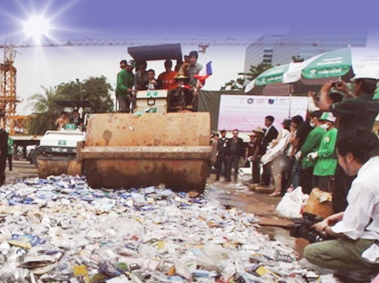 Deputy Commerce Minister Siriwat Kajornprasart presided over the event, which was a collaboration between the Commerce Ministry, the Customs Department, the Department of Special Investigation, the Intellectual Property Department and the Royal Thai Police.

Diplomats from embassies to Thailand, including the United States and the European Union, were also invited to the event. The destruction is the second time this year of destroying all counterfeit items with a value of Bt3.1 billion over $100 million.

This years first destruction was held in the Andaman resort of Phuket where 93,000 counterfeit items worth Bt58 million over $1.93 million were destroyed.Although many countries see that there are many cases related to the intellectual property rights violation in Thailand, Mr Siriwat explained that the Thai government and private sector continued to tighten measures in suppression and to educate youths and the public in general not to use goods violating intellectual property rights.

The deputy commerce minister added that remains of the destroyed items will be recycled for economical use. Meanwhile, the Intellectual Property Department will apply the stricter measures to deal with the matter and to prevent the violations.

Mr Siriwat said he believed enforcement of the Intellectual Property law in conjunction with more strict suppression measures, the United States will revise Thailands status from its current US government Priority Watch List PWL status to its Watch List WL.

via Thailand destroys US$100 million in counterfeit intellectual property.

In 2011 Thailand has once again been relegated to another year on the United States’ Priority Watch List for insufficient enforcement or protection of intellectual-property rights,  for the fourth successive year by the Office of the United States Trade Representative (USTR).

This is largely due to the absence of laws in Thailand governing the use of camcorders in cinemas and a high rate of piracy and counterfeiting on digital media and the Internet.

Disappointed over an unchanged and an improvement from  Washington’s Priority Watch List (PWL), announced recently by the US Trade Representative (USTR), the Commerce Ministry will ask the Royal Thai Police Bureau to more strictly enforcing and suppressing violations of US intellectual property rights in the kingdom.

The USTR in its report released on May 2011, maintained Thailand on its PWL for 2011 which has been unchanged since 2007 but the Thai government has attached importance on intellectual property rights protection and has continuously suppress violators in the past, the government, therefore, plans to write a letter to USTR and enquire about the country’s status which was kept unchanged for 2011.

Last year, 4,851 cases of IPR violations were filed. To stimulate awareness among Thais, particularly young people, the Education Ministry has included a course on IPR knowledge for students in every public school, as a major subject.

29 trading partners of the US are on the Watch List. They are regarded as meriting bilateral attention to address underlying IPR problems.