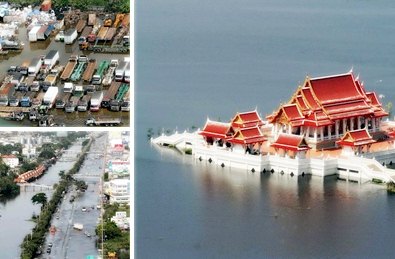 According to Moody’s Investors Service, the country’s GDP is estimated at 2.8 percent in 2011. In a separate report, which highlights the risks facing Japanese car and electronics manufacturers in Thailand, the credit rating agency also speculated that Honda Motor Co. would see a profit drop by 10 percent as the disaster forced its operation stoppage.

Its share prices may fall accordingly. Also sharing the same situation could be Isuzu Motors Ltd., which has just launched a new model commercial vehicle. Most of its production is in Thailand.

Moody’s Investors Service has predicted that the flood crisis would cause a sharp fall in Thailand’s gross domestic product this year.

Nissan Motor, Toyota Motor could be a little affected if they are able to find automotive parts elsewhere. Canon Inc. should get market share from Nikon Corp and Sony Corp., both of which produce high-end DSLR cameras in Thailand.

After meeting with engaged agencies and industrial entrepreneurs of the flooded industrial tracts—which comprise a significant portion of Thailand’s industrial capacity—the Factory Land, Saha Rattana Nakhon, Bang Pa-in, Rojana and Hi-Tech in the nearby central province of Ayutthaya, as well as the Bangkadi and Nava Nakorn estates in Pathum Thani.

Once the water level starts to recede or is stable, floodwaters will be pumped out immediately.

He said that the government’s plan for financial support is so that production can resume as soon as possible. A budget of several hundred billion baht is expected to initiate rehabilitation, including loans for entrepreneurs to buy new machinery and a budget of over Bt25 billion for reconstruction of basic infrastructure.