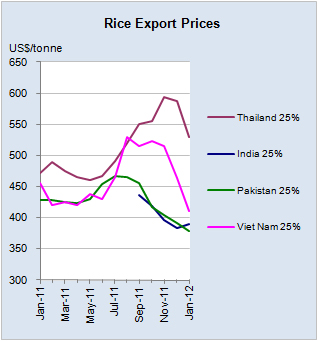 Since November, the forecast for global paddy production in 2011 has been lifted by 700 000 tonnes, mainly on improved prospects for crops in Asia.

At the expected 721 million tonnes, world rice production would be 21.4 million tonnes, or 3 percent, larger than in 2010 and hit a new record. This excellent performance confirms the resilience of the sector and its ability to respond to attractive prices, even against the backdrop of  numerous  weather setbacks and widespread increases in basic input prices.

Thailand's rice is significantly pricier than its competitor

Paddy production in Asia is forecast at 653 million tonnes, 3 percent above 2010, and 1.5 million tonnes more than anticipated in November. The revision reflects improved prospects especially for Pakistan, but also Cambodia, Nepal, the Philippines and Viet Nam, while expectations for China and Thailand deteriorated.

Compared with 2010, particularly large production gains are to be witnessed by Bangladesh, China, India, Pakistan and Viet Nam, but the season may end negatively in Indonesia, Japan, the Republic of Korea, Myanmar, Sri Lanka and Thailand. In Africa, production is foreseen to reach 25.5 million tonnes, 1 percent up from 2010, driven largely by an expected rebound in Egypt and gains in Guinea, Nigeria and Sierra Leone. However, Mali, and Madagascar incurred severe contractions.

The season was very favourable in Latin America and the Caribbean, where all the major producers, except Ecuador and Peru, harvested bumper crops. In Europe, North America and Oceania, sizeable gains were recorded in Australia and the Russian Federation but production fell in the EU and, notably, in the United States.Global trade in rice in calendar 2011 is estimated to have reached an unprecedented level of 34.5 million tonnes, up nearly 3.0 million tonnes from 2010.

By contrast, deliveries by China Mainland, Egypt, Pakistan and the United States fell, largely reflecting reduced availability or high domestic prices.FAO has lowered its forecasts of international trade in rice in 2012 by 1.0 million tonnes, as improved prospects for production in several major importing countries may weaken world import demand.

At the forecast level of 32.8 million tonnes milled basis, trade would be 5 percent lower than in 2011, with much of the decline driven by a cut of purchases by Bangladesh, Indonesia, Nepal, Nigeria and the Philippines. As for suppliers, uncompetitive prices may depress exports from Thailand, but supply constraints are seen also to curb shipments from Argentina, Brazil, Myanmar, the United States and Uruguay. Sales from Viet Nam may also fall short of the 2011 high. On the other hand, a full return to the market, following the lifting of the non-basmati export ban, may enable India to make up for part of these shortfalls, with Cambodia, China Mainland and Pakistan also forecast to step-up deliveries.

The e-commerce giant’s executive chairman, Jack Ma, was in Thailand this week and has become the first big name to join Thailand’s plan to upgrade its economy known as Thailand 4.0. END_OF_DOCUMENT_TOKEN_TO_BE_REPLACED

Asia Pacific is an increasingly popular region for travel, according to the Mastercard Global Destinations Cities Index (GDCI) 2017. END_OF_DOCUMENT_TOKEN_TO_BE_REPLACED

According to the National Economic and Social Development Board (NESDB), Thailand’s GDP in Q2/2017 rose 3.7%YOY (compared to the same quarter last year), or 1.3% when seasonally adjusted and compared to the previous quarter. END_OF_DOCUMENT_TOKEN_TO_BE_REPLACED