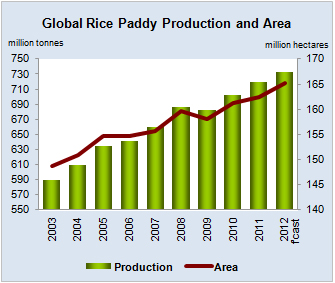 Since January, the estimate of world paddy production in 2011 has been lowered by 1.4 million tonnes to 720.0 million tonnes 480.1 million tonnes, milled basis, reflecting deteriorating prospects in several countries, in particular Bangladesh.

Yet, if confirmed, world output would surpass the already bright 2010 outcome by 2.5 percent, or 17.7 million tonnes. This would be a rather positive result, given the erratic climatic conditions that have characterized the season under the lingering la Niña, which, only now, is dissipating. Much of the 2011 expansion stemmed from gains in major Asian rice producing countries, especially India, where output surpassed 100 million tonnes of milled rice for the first time. Record crops were also harvested in Latin America and the Caribbean, while production in Oceania proceeded on a recovery path.

FAO has set its first forecast of global paddy production in 2012 at 732.3 million tonnes 488.2 million tonnes, milled basis, 1.7 percent above the revised 2011 estimate.

These gains served to more than compensate for falling production in Africa, North America and Europe.

Turning to the coming season, FAO has set its first forecast of global paddy production in 2012 at 732.3 million tonnes 488.2 million tonnes, milled basis, 1.7 percent above the revised 2011 estimate.

The year-on-year increase, equivalent to 12.3 million tonnes, partly rests on expectations of a return to more neutral weather conditions. It would rely mostly on a 1.6 percent expansion of plantings to 165.1 million hectares, as average yields are expected to remain steady at a relatively high 4.44 tonnes per hectare.

The availability of ample and relatively cheap supplies is expected to allow India to increase rice exports and capture a larger share of the market. Australia, Cambodia, Pakistan and Viet Nam are also expected to sell more.

Asia is mostly behind the 2012 projected increase in world production, with large absolute gains expected in Bangladesh, China, India, Myanmar, Pakistan, the Philippines and, especially, Thailand, where the sector is foreseen to recover from last years disastrous floods. The outlook is also positive in Indonesia, Malaysia and Sri Lanka, which have already harvested their main 2012 crops. Production is expected to rebound in Africa, headed by Mali, Senegal and Nigeria, while Madagascar may incur a contraction, following the passage or landfall of successive storms since January.

Prospects are rather subdued in Latin America and the Caribbean LAC, where production is likely to slide by 7 percent from the 2011 record, after a combination of dry weather, falling rice prices and rising input costs depressed plantings, especially in Argentina, Brazil and Uruguay. In the other regions, drought and falling prices also prompted farmers in the European Union and the United States to shift to other crops, while Australia already garnered a bumper 2012 crop on ample irrigation water.

FAOs forecast of global rice trade in calendar 2012 has been raised to 34.3 million tonnes, 1.5 million tonnes more than foreseen in January.

The new forecast reflects upwards revisions to imports, especially by China, Egypt, Indonesia and Senegal, while exports, mainly by India, Brazil, Pakistan and Uruguay, were scaled up. Nonetheless, at 34.3 million tonnes, 2012 world trade in rice would still fall 2 percent, or close to 900 000 tonnes, short of the 2011 record. This years contraction is expected to be driven by faltering import demand in the major traditional markets in Asia, many of which just garnered large crops. By contrast, amid deteriorated output prospects, Africa is now foreseen to require greater deliveries.

Imports by countries in Latin America and the Caribbean, Europe and North America are also expected to rise. The availability of ample and relatively cheap supplies is expected to allow India to increase rice exports and capture a larger share of the market. Australia, Cambodia, Pakistan and Viet Nam are also expected to sell more.

India’s resumption of non-basmati deliveries, after it lifted its 3-year export ban last September, is instigating growing competition and falling prices, a trend that is hitting Thailand’s exports most negatively. Reduced availabilities may also depress sales by Argentina, Brazil, China, Myanmar, the United States and Uruguay.