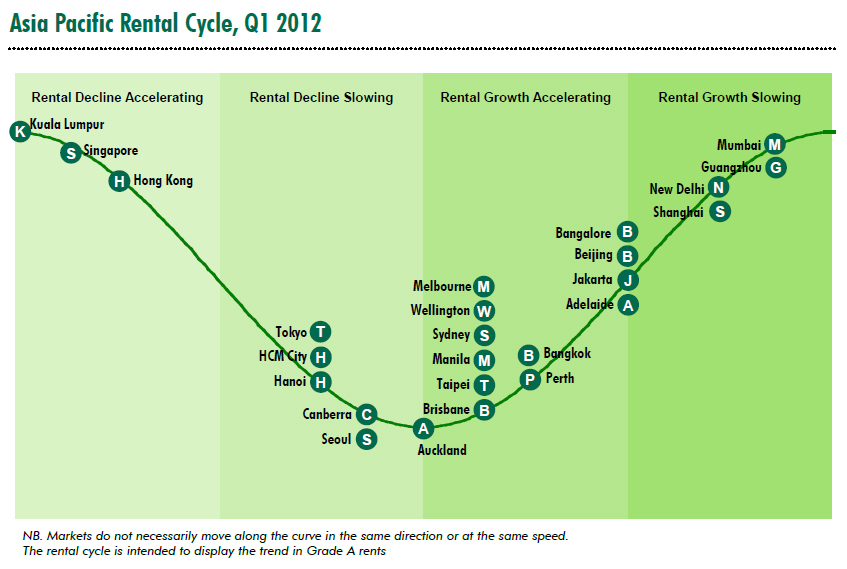 Office vacancy in Asia Pacific continued a slow decline in Q1 2012, however, this trend is likely to end in Q2, given slowing occupier demand and new supply coming online across the region, according to the latest Asia Pacific Office MarketView report published by CBRE, the world’s leading commercial real estate services firm.

The minor dip in overall office vacancy in Asia Pacific resulted from diverging performance in markets across the region. Nearly half the countries in Asia Pacific recorded a drop in vacancy, slightly offsetting those regions that experienced an increase in vacancy. In Asia, overall vacancy in Bangkok, Hong Kong, Shanghai and Beijing continued to decline, while Tokyo, Singapore, Kuala Lumpur and New Delhi all saw vacancy rise.

In Bangkok, the Grade-A CBD vacancy rate fell to 18.3%, down from 20.5% in Q4 2011, as space in 2 new buildings completed in late 2011 was gradually filled.  Limited future supply and steady leasing momentum will support further rental growth in 2012.

Demand for office space in other cities in Asia Pacific weakened further in Q1 2012, as corporates continued to seek opportunities to reduce real estate costs via consolidation and/or relocation. This trend is spurring the release of secondary space in a number of key markets, which will continue to exert pressure on vacancy.  Demand for large floor plates also fell during the quarter, with most leasing deals completed over the period for smaller spaces. In terms of industry sector, financial institutions—particularly major international banks—remained generally inactive. Professional services including IT and consumption-related sectors accounted for the bulk of office leasing demand.

The e-commerce giant’s executive chairman, Jack Ma, was in Thailand this week and has become the first big name to join Thailand’s plan to upgrade its economy known as Thailand 4.0. END_OF_DOCUMENT_TOKEN_TO_BE_REPLACED

Asia Pacific is an increasingly popular region for travel, according to the Mastercard Global Destinations Cities Index (GDCI) 2017. END_OF_DOCUMENT_TOKEN_TO_BE_REPLACED

According to the National Economic and Social Development Board (NESDB), Thailand’s GDP in Q2/2017 rose 3.7%YOY (compared to the same quarter last year), or 1.3% when seasonally adjusted and compared to the previous quarter. END_OF_DOCUMENT_TOKEN_TO_BE_REPLACED