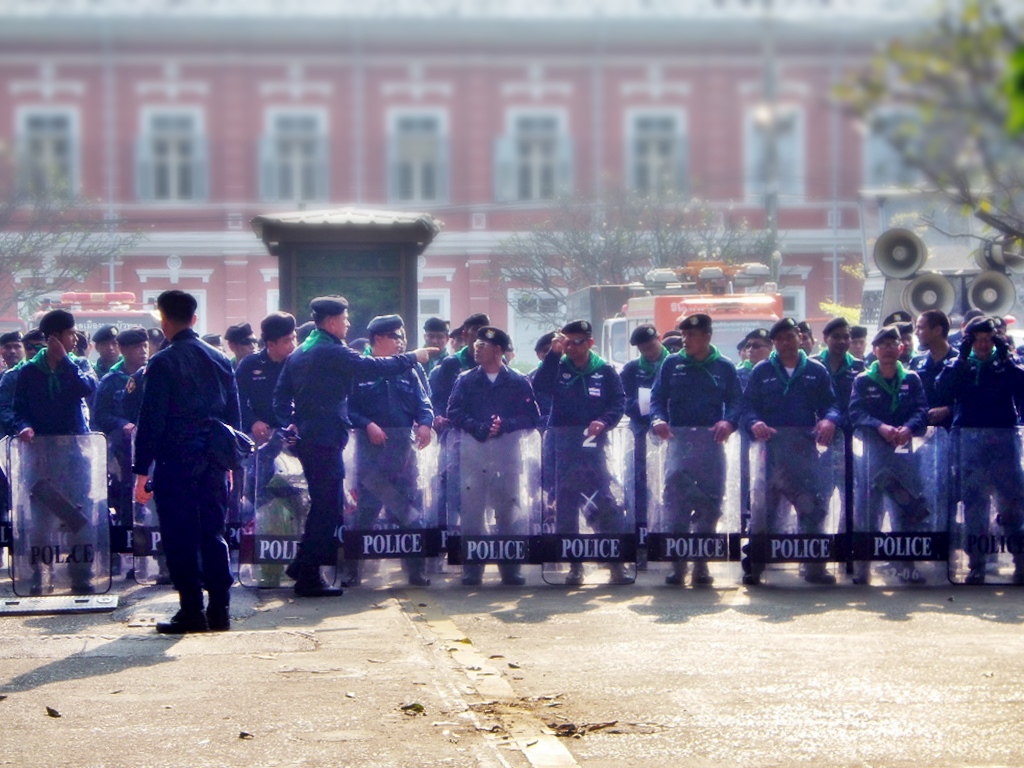 The authorities in Thailand have started to retake control on several sites in Bangkok including Government House surroundings.  They plan to move further with several other sites and the interior ministry, National Security Council chief Paradorn Pattanatabut told AFP, saying officials would attempt to negotiate with the demonstrators first.

“We will re-take wherever we can and arrest protest leaders,” he said. “It’s not a crackdown on the protests — it’s enforcement of the law over the protest sites.”

The first explosion was reported at around 10.45am during a confrontation between police and anti-government protesters. Police said a home-made bomb, hidden near a barricade of sandbags, exploded as police were removing the sandbags. There were no injuries.

The second explosion was at 11.15 am as police moved out of Makkawan Bridge and protesters were about to move in. A reporter from Siam Rath newspaper, identified as Vacharin Klinmali, was injured and rushed to a nearby hospital.

There was a minor clash before police retreated from the area. Metropolitan Police Commander Kamronwit Thoopkrachang led a group of police to raid the area from Missakawan intersection to Makkawan intersection on Ratchdamnoen Road in an attempt to retake the area and Government House which has been sealed off by protesters of the Network of Students and People for Reform of Thailand for the last few months.

Police and demonstrators were in close confrontation risk-prone Chaeng Wattana Road where revered monk Phra Buddha Issara has been leading the protest to shut down Government Complex for almost a month.

Demonstrators sat on the road, blocking the entrance to Chaeng Wattna Soi 14, chanting Buddhist prayers on this Buddhist holy day as police, brought in mainly from nearby Ayutthaya province, formed a shield wall a few metres away on the opposite side of the road.

Shortly after dawn, Phra Buddha Isara led a group of Buddhist monks to receive alms from people, many of whom were dressed in white to mark the religious Makha Bucha day today amid reports since last night that police would storm the rally site.

Phra Buddha Issara calmed the protesters and reiterated non-violence in response to possible police force. Tyres were piled up on both sides of Chaeng Wattana Road to protect demonstrators.

On Rajdamnoen Avenue near Government House which has been occupied by protesters of the Network of Students and People for Reform of Thailand (NSPRT) for the last three months, Metropolitan Police Commander Kamronwit Thoopkrachang led 20 companies of police to Miksakawan and Makkawan intersections near one of the entrances to Government House to retake the area.

Police demolished the protesters’ shelters, tents and obstruction materials before penetrating the area without any clash or violence. Protesters had earlier collected their belongings and departed the scene

Police said the protesters had violated the Emergency Decree – an offence liable to two years prison and a maximum fine of Bt40,000.

Protesters of the People’s Democratic Reform Committee (PDRC) who had sealed off the Interior Ministry for several months had been on alert overnight following a warning of a police raid early this morning.

The e-commerce giant’s executive chairman, Jack Ma, was in Thailand this week and has become the first big name to join Thailand’s plan to upgrade its economy known as Thailand 4.0. END_OF_DOCUMENT_TOKEN_TO_BE_REPLACED

Asia Pacific is an increasingly popular region for travel, according to the Mastercard Global Destinations Cities Index (GDCI) 2017. END_OF_DOCUMENT_TOKEN_TO_BE_REPLACED

According to the National Economic and Social Development Board (NESDB), Thailand’s GDP in Q2/2017 rose 3.7%YOY (compared to the same quarter last year), or 1.3% when seasonally adjusted and compared to the previous quarter. END_OF_DOCUMENT_TOKEN_TO_BE_REPLACED