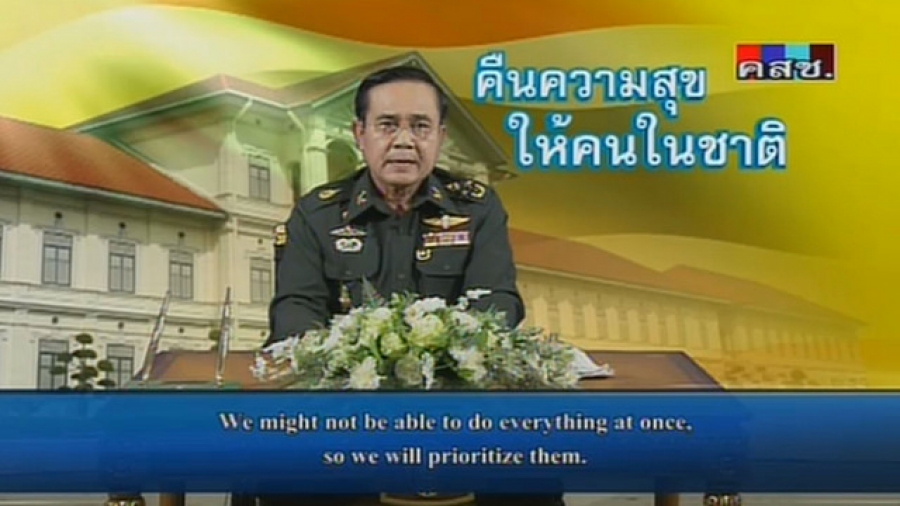 Head of the National Council for Peace and Order (NCPO) General Prayut Chan-O-Cha has stressed NCPO’s attempts to return happiness to the people and strengthen Thailand’s democracy in a way that is acceptable to all sides.

In his televised public address on 6 June 2014, General Prayut stated that Thailand had suffered political conflicts for nine consecutive years, and the conflicts had become more severe during the past six months.

He said that the country needs time to fix its problems in order to bring everything back to normalcy for the happiness of the Thai people, as well as foreigners residing in Thailand. The election process, which is part of the democratic system, must be revised to remove “parliamentary dictatorship.” Other issues, such as those involving abuses of political power must be addressed, since they have led to conflicts among the people.

We understand that we are living in a democratic world, but we must also examine ourselves to see how Thailand can be resilient in the face of the many challenges that democracy brings. We therefore need to adjust ourselves in many ways – from administration methods to the budget system, even the electoral system – the starting point of democracy itself. Checks and balances need to be improved. Parliamentary dictatorship has to be removed.

General Prayut said that martial law was still necessary and it would be enforced together with normal laws. He called for better understanding of NCPO’s intention by the international community, saying that Thais must respect the law, as this would also restore international confidence.

He pointed out that NCPO would accept all comments and listen to all sectors of Thai society. Useful suggestions would be considered for translation into action. NCPO deemed it urgent to ease the difficulties of the people, especially low-income earners. For instance, it has given top priority to making payments to rice farmers under the rice-pledging scheme and tackling such problems as agricultural products and energy prices.

As for the establishment of Centers of Reconciliation for Reform, he said, the objective is to encourage all groups of people to talk to each other as before, and remove the severe divisions that have come between them over the years. The military will serve as a facilitator and observer. Results of studies on national reconciliation, conducted earlier by several groups, will be brought up for discussion among the people.

Regarding national reform, General Prayut explained that all sides would be invited for discussions on all issues and on proposals for the reform. This would lead to the second phase, when a new government is formed, together with a reform council and legislative assembly. All the issues would be submitted to the reform council before being forwarded to the assembly for law promulgation.

State officials were being controlled by corrupted individuals, political parties, and populist schemes. The country was virtually paralyzed. There were some good things, but I am only mentioning the problems here tonight. As a result, there was widespread conflict at all levels. Society, the economy, and our international relations were all being affected. We were losing trust and confidence from the international community.

He stressed the importance of preparations for the upcoming ASEAN Community, saying that all ministries must move forward with their projects and activities in this regard to create confidence in Thailand. Public relations campaigns must be stepped up to boost cooperation, as well. For example, the ASEAN forest project has been launched in border areas by the army. The project is being spread to other areas of the country.

As for the international community, we are asking for your patience to give us time as we build our country, our democracy, a true democracy for Thai people with order and real understanding, a democracy with good governance in accordance with the philosophies bestowed to the Thai people by His Majesty the King. Everybody is equal in a society with morals, compassion, and unity. We have to look ahead and see at what is best for the people.

He urged everyone to attach importance to security and not to leave this issue to the military, the police, and government agencies alone. Everyone can give a helping hand to improve the stability of the country as a whole.

Hundreds of Thai Government websites hacked and infested with malware

The e-commerce giant’s executive chairman, Jack Ma, was in Thailand this week and has become the first big name to join Thailand’s plan to upgrade its economy known as Thailand 4.0. END_OF_DOCUMENT_TOKEN_TO_BE_REPLACED

Asia Pacific is an increasingly popular region for travel, according to the Mastercard Global Destinations Cities Index (GDCI) 2017. END_OF_DOCUMENT_TOKEN_TO_BE_REPLACED

According to the National Economic and Social Development Board (NESDB), Thailand’s GDP in Q2/2017 rose 3.7%YOY (compared to the same quarter last year), or 1.3% when seasonally adjusted and compared to the previous quarter. END_OF_DOCUMENT_TOKEN_TO_BE_REPLACED