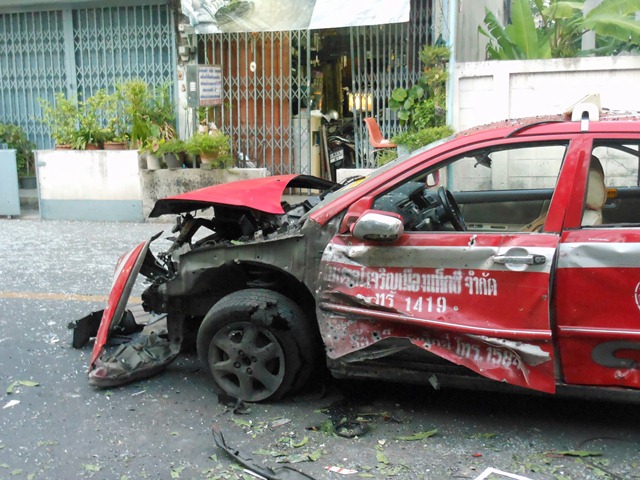 The Three bombs that rocked Bangkok on Valentine Day by suspected Iranian operatives was a wake-up call for the Thai authorities to define a new their national security strategy, which has ignored the international terrorism threat. Despite the evidence and seriousness of the situation, the current government leaders were still in denial reiterating shamelessly that the bombs and motives were acts of individuals and not part of foreign networks.

Again, Thailand still has a good karma as the heinous plots failed The country’s latest five-year national security strategy (2007-2011), concluded last year, pursued two priorities—internal security and stability as well as protection of national sovereignty and territorial integrity. What were the outcomes?

The Three bombs that rocked Bangkok on Valentine Day by suspected Iranian operatives was a wake-up call for the Thai authorities to define a new their national security strategy. Picture: Marion Boccon-Gibod for Siam News Network

Obviously, the strategy worked better when it dealt with external rather than internal exigencies. Political polarization after the 2006 coup that led to devastating conflicts and deaths among the Thais revealed the weakest link of the country’s overall security landscape. This conflict will remain and manifest itself in various forms of symptoms that should occupy the security policy-makers in years if not decades to come.

In a similar vein, the turbulence in the southern provinces has always been considered the main cause for the country’s instability but not to extent of damages caused by political divisions, real or imagine. One of the key reasons was the incongruence between policies and realities on the ground in the South which does not bode well for long-standing settling of violence and conflict.

In response to media enquiries about the United Nations Security Council issued on attacks against Israeli diplomatic personnel, a Thai spokesman recently commented that like other members of the international community, Thailand condemns terrorism in all its form and manifestation, whenever and wherever it takes place.

Mr. Thani Thongpakdi, Director-General of the Department of Information and Foreign Ministry Spokesman stated that Thailand had been actively working to combat terrorism within various fora, including the United Nations and ASEAN.

He said that the Ministry had been informed by the Embassy of the Islamic Republic of Iran in Thailand that, following verification of their nationalities by the authorities concerned in Tehran, it could be confirmed that the two suspects currently being detained in Thailand are of Iranian nationality.

“The Embassy reiterated, however, that the said suspects were not linked with the Iranian Government or organizations in Iran and that they had acted independently as individuals. As a consequence, the Embassy has sought consular access to the two suspects which the Ministry is currently coordinating,” he said.

According to Mr. Thani, from police investigations thus far into the explosions incident on Sukhumvit Road on 14 February 2012, no linkage had yet been found between this incident and those that recently took place in India and Georgia. Investigations are still on-going and should new evidence emerge, further announcements would be made upon the facts gathered.

Regarding the extradiction request for the suspect currently being detained in Malaysia, he said that the official request had already been conveyed to the Malaysian authorities concerned through diplomatic channels through the Royal Thai Embassy in Kuala Lumpur.

The spokesman said that all parties concerned should therefore rest assured that the investigations by the Thai agencies concerned into the said incident would be conducted professionally and thoroughly with respect for the due process of law. In addition, it is hoped that all the parties concerned would respect Thailand’s sovereignty and not undertake any activities in the Kingdom that may affect the country’s national security or use Thailand as a base to undertake activities targeting other countries, their nationals or interests.