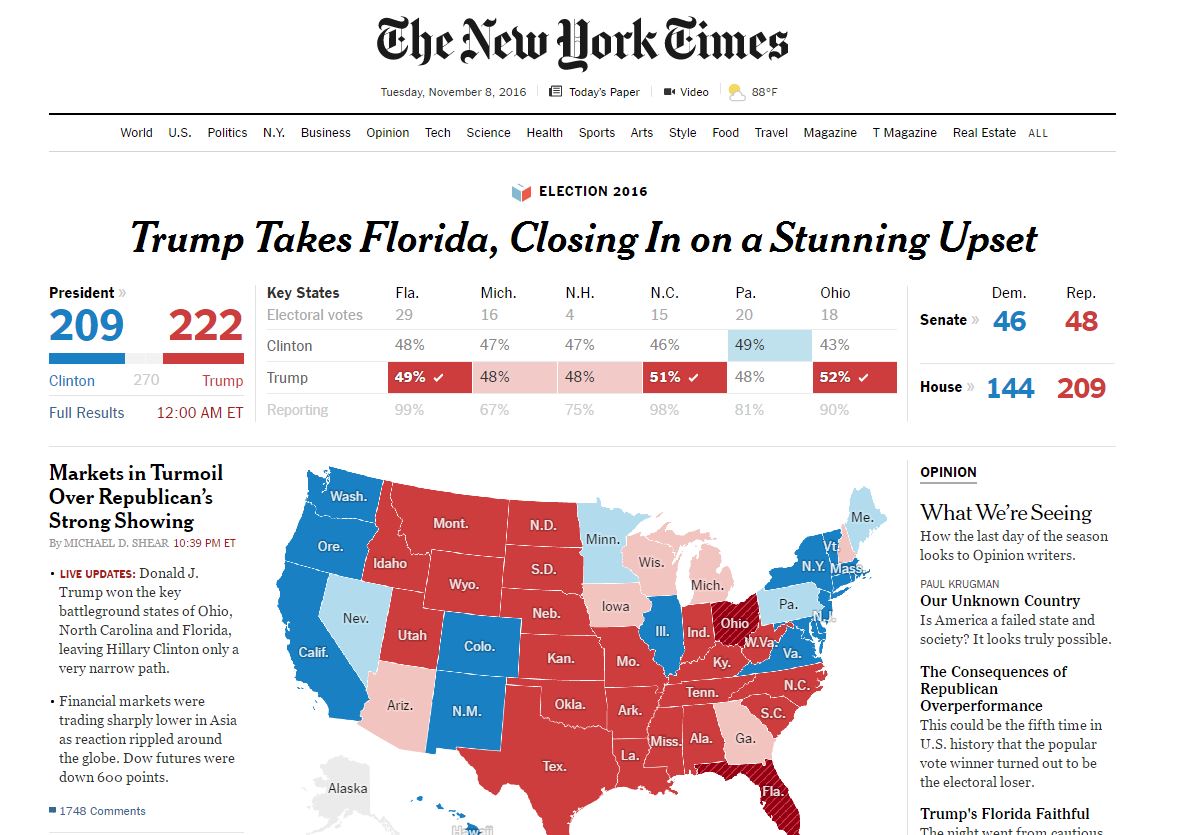 The United States heads to the polls on Tuesday for what has been a bitterly contested presidential election marked by scandal.

Given the leading role that the United States plays in global affairs, as the world’s top military power, largest economy, and the primary architect of the current international political order, the stakes are huge not just for those casting their ballots but the entire world.

A vote for Hillary Clinton is a vote for incremental reform, inclusiveness and cooperation led by an avowed policy wonk.

Her experience as former First Lady, Senator and Secretary of State would, the argument goes, make her the most qualified president in US history.

In her role as Secretary of State, Clinton was responsible for the US ‘rebalance’ to Asia during President Obama’s first term. A great deal of foreign policy continuity from Obama to Clinton could be expected.

A vote for Trump, on the other hand, appears based in fantasy

Trump’s foreign policy includes the construction of a giant wall between the United States and Mexico and a restriction on the entry of Muslims (and others) into the United States. No one knows the foreign impact of these promises.

When it comes to the economy, Trump is unashamedly protectionist, threatening to slap tariffs on major partners willy-nilly. His economic chicanery risks trade wars, job losses at home and global recession.

There has, naturally, been considerable angst around the Asia Pacific about the outcome of the election and what it will portend for US policy in the region. As Sheila Smith explains in one of our leads this week:

‘Trump shocked the region by arguing that US alliances in Asia, like those with the North Atlantic Treaty Organization, no longer serve US interests. Japan and South Korea…should be left to fend for themselves against a nuclear North Korea. Trump views these longstanding security arrangements not as part of a broader strategy, but as a transaction to be renegotiated at Washington’s whim’.

Trump’s bluster here would not only be detrimental to US allies but would be a case of the United States shooting itself in the foot.

‘Taxing US allies for the use of US forces would destroy the United States’ close network of partnerships in Asia, the very strategic assets that successive US administrations have laboured to build over the last half century’. The success of the US forward deployment strategy and the ability of the US to retain its status as a Pacific power are both predicated on these relationships.

Reliable forecasts—despite the damage to her lead in the polls done by FBI Director James Comey’s precedent-breaking announcement of an investigation of new Clinton emails—suggest that Clinton is likely to win. But as TJ Pempel explains in our other lead this week, while Asian states will be ‘unified by their collective sigh of relief’ that the possibility of a Trump presidency is averted, the relief may be short-lived.

The US rebalance to Asia is already wanting. ‘Instability and warfare in the Middle East will continue to devour disproportionate amounts of policymaking bandwidth…and obscure the vision of any moves toward Asia’.

The ‘Trans-Pacific Partnership (TPP), key to Obama’s efforts to engage and structure Asia Pacific trade and investment, is dead for the foreseeable future’ at least until the 2018 Congressional elections.

Domestically, ‘Clinton will enjoy no honeymoon’ as ‘party and cultural divisions in the United States have taken on tribal exclusivity’. Uniting a divided nation will be all the more difficult given the uncertainties over whether Trump will accept the result of the election: he has repeatedly complained about election rigging and he quipped in the third presidential debate that he plans to keep us in suspense when directly asked if he would accept the election outcome.

As Smith notes, the region faces many challenges. They include: ‘containing Pyongyang’s ambition to create a viable nuclear force’, ensuring maritime security in Southeast Asia, ‘creating barriers to cyber-intrusions’, and persuading the Chinese and American people ‘that their future prosperity and security will depend upon a shared set of rules and norms for all of the people of the Asia Pacific’.

The common thread across these challenges is that they ‘will all require partners’ if the region is to face up to them successfully. This is the most critical difference between Trump and Clinton. Where Trump promises that he is the only one who can fix problems and will do it all alone, Clinton emphasizes the importance of smart diplomacy and multilateral cooperation. Neither Trump’s isolationist and authoritarian streaks nor the temptation of US unilateralism are going to cut it. Today’s world requires intensive consultations and cooperation among nations in order to uphold shared peace and prosperity. A Clinton presidency is the only one that can realistically offer a US Asia policy built on a foundation of cooperation.

Neither Trump’s isolationist and authoritarian streaks nor the temptation of US unilateralism are going to cut it. Today’s world requires intensive consultations and cooperation among nations in order to uphold shared peace and prosperity. A Clinton presidency is the only one that can realistically offer a US Asia policy built on a foundation of cooperation.

The EAF Editorial Group is comprised of Peter Drysdale, Shiro Armstrong, Ben Ascione, Ryan Manuel, Amy King and Jillian Mowbray-Tsutsumi and is located in the Crawford School of Public Policy in the ANU College of Asia and the Pacific.
Source link

Trump vs. Clinton : a sequel to presidential History of “October Surprises” ?