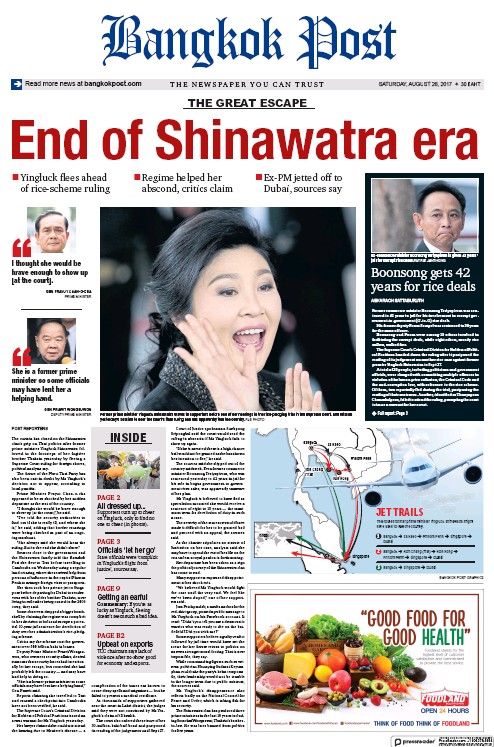 The Thai Supreme Court will hand down its postponed verdict on former Thai prime minister Yingluck Shinawatra’s involvement in a rice subsidy scheme on 27 September 2017.

We will know then if her apparent decision to go into exile was warranted.

But the 42 year prison sentence imposed on her former commerce minister Boonsong Teriyapirom suggests a jail term is in the offing.

It would now seem unlikely that Yingluck or her older brother Thaksin Shinawatra will ever return to Thailand, let alone compete politically.

They will join the roll call of prominent exiled Thai prime ministers that includes Plaek Phibunsongkhram, Pridi Phanomyong (both of who died overseas) and Thanom Kittikachorn. Thai politics remains a brutal game.

End-of-an-era notwithstanding, it seems clear that the Shinawatras have changed Thai politics irrevocably.

Thaksin emerged as the saviour of big business amid the fallout from the Asian Financial Crisis, but quickly reinvented himself as a man for the neglected rural and urban poor. It was Thaksin’s policies for these constituencies that brought the word for populism (prachaniyom) into the Thai language.

His party Thai Rak Thai introduced modern political techniques into Thailand such as surveys and focus groups, but it is his policies that will prove his more substantial legacy.

The universal 30-baht health policy for public hospitals — which removed the stigma of underprivileged groups having to hold a special card to receive health services — was his signature innovation. It remains hugely popular and largely in place today.

Other policies, including a village loan scheme, were equally important in awakening a greater interest in national politics among the citizens of north and northeast of Thailand. Yingluck continued in the same vein when elected in 2011, introducing a 300-baht minimum wage policy.

Thaksin’s downfall was hubris. After winning an historic majority in 2005, the tax-free sale of his communications empire Shin Corp, together with his interference in independent agencies like the electoral commission, provoked visceral dislike from Bangkok’s middle classes and elites, culminating in the September 2006 coup.

Had she not passed an amnesty bill offering a means for Thaksin’s return, and had she been more aware of how her poorly constructed rice subsidy scheme would disturb the deep financial conservatism of Thailand’s bureaucrats, she could still be ruling today.

It remains Thailand’s misfortune that neither removal was permitted to occur through the ballot box.

The departure of the Shinawatras will not change the divide between Thailand’s middle classes and elites on one side, and the urban and rural poor of the north and northeast on the other.

Despite the earnest leadership of General Prayuth Chan-Ocha and his anti-corruption and pro-happiness campaigns, his regime’s repression of free speech has merely disguised this structural bedrock of Thai politics.

This means that even without Yingluck her Pheu Thai Party remains a contender to win the next election.

The demographics are in its favour, and the brand of the party is strong. It has shown before, with Samak Sundaravej’s election in 2008, that it doesn’t need a Shinawatra at the helm to win government. It has progressive and talented thinkers and speakers, including Chaturon Chaisang and Nattawut Saikua.

At the same time, there are a number of ways in which it could lose momentum.

The risk of disunity and fragmentation is ever present in Thailand’s fluid politics, a danger that Pheu Thai kept at bay but probably has not extinguished.

The defection of Buriram parliamentarian Newin Chidchob’s faction is an example. Newin crossed the floor to join the Democrats in 2008, bringing down the Thaksin-affiliated Somchai Wongsuwat government.

Will Pheu Thai’s strong electoral track record be enough to persuade its factional lieutenants to stay on board?

Another risk is allowing Thaksin and Yingluck to exert significant and visible control from overseas.

The slogan Thaksin kit Pheu Thai tam (Thaksin thinks, Pheu Thai does) worked well in the north and northeast of Thailand but was poison for the party’s reputation among Thailand’s elites. It provoked the description of Pheu Thai as a hun choet (puppet) party.

This is more than a matter of insults. Thailand’s new constitution has introduced numerous tripwires whereby a party or leadership can be indicted on the grounds of character or financial impropriety. It is fairly easy to imagine a future Pheu Thai government being brought down by an accusation of being controlled by fugitives.

In many ways the political transition brought on by the end of the Shinawatra era (should this prove to be the case) could be more important for everyday Thais than the royal transition. Progressive and egalitarian socio-economic policies are not a given in Thailand’s hierarchical and Buddhist society, where one’s station in life is often assumed to be the consequence of deeds or misdeeds performed in a former life. A strong Pheu Thai party — more respectful of constitutional limits on power and sustainable economic policy, but no less committed to its constituents — would be a good thing for Thailand’s democracy.

But any potential return to government for Pheu Thai will be more tightrope walk than cakewalk. It will face a 250-appointed-member Senate and a military fearful of reprisals. In this climate any excessive triumphalism or ineptitude will be punished severely, and the possibility of an appointed prime minister will strengthen.

Greg Raymond is a Research Fellow in the Strategic and Defence Studies Centre at The Australian National University, and co-editor of the journal Security Challenges. Follow him on Twitter at @gregoryVraymond.