Alibaba’s entry into Southeast Asia served as social proof for many entrepreneurs and businesses that they were onto something big, which led to a year of exuberance for ecommerce in the region.

Even as we get closer to 2018, there are already numerous casualties in one of the most promising ecommerce growth markets in the world.

Alibaba doubled down on its Lazada investment by upping its share from 51 percent to 83 percent and in a push to monopolize the market, put grips on Tokopedia, arguably one of Lazada’s biggest competitors in Indonesia.

Tencent, through JD or directly, also began executing its China playbook by investing in companies like Sea, Go-Jek, Traveloka, Pomelo Fashion and Tiki.vn.

“We’re just at the beginning, [the Alibaba-Lazada deal] will kickstart the whole cycle. It will attract more global investments into the region, and attract more entrepreneurs who now see this region as a great place to start a business.” — Stefan Jung, founding partner at Indonesia-based Venturra Capital in an interview with Tech in Asia

Global attention from the US came from KKR, who through Emerald Media, put $65M into ecommerce ‘arms dealer’ aCommerce in a bid to replicate Baozun’s dominance in the Chinese “TP” (Tmall Partner) landscape.

And the plays won’t stop here.

Leveraging newly consolidated positions of strength, marketplaces will cross traditional boundaries and move into areas like private label brands and offline distribution. Brands will also feel increasingly cornered, facing a “damned if you do, damned if you don’t” situation.

Those that survive 2018 will have to find a niche for themselves, such as in fashion or home, because there isn’t much room left for another horizontal ecommerce player. Others will be tempted to take risky shortcuts like say, raising money through ICOs.

2018 will also see Tencent, not Alibaba or a local company, emerge as the winner in mobile payments in Southeast Asia.

It might be a good time to start learning Chinese.

1. Plata o Plomo: Southeast Asia ecommerce will be increasingly factionalized into Alibaba and Tencent camps, and locals will pick sides

Given its similarities to China roughly 10 years ago, Southeast Asia has become a gold rush for Chinese Internet giants looking to expand beyond the mainland. It was Alibaba’s acquisition of Lazada last year that triggered an arms race between China’s #1 and #2 in Southeast Asia, and in turn, will cause local companies to choose sides.

Alibaba also led a $1.1B investment in Tokopedia in 2017, continuing to place its biggest bets on ecommerce. Moving forward, the company is expected to position Lazada and Tokopedia as the Tmall and Taobao of Southeast Asia, respectively.

Meanwhile, Tencent has aggressively tried to replicate a three-prong formula that was successful in its fight against Alibaba in China: gaming, mobile and payments.

The first step was becoming the largest shareholder of Sea (previously Garena), predominantly a gaming powerhouse that runs Shopee, a mobile-first ecommerce marketplace and the second was placing bets on Go-Jek to become a “super app” like WeChat and WeChat Pay. 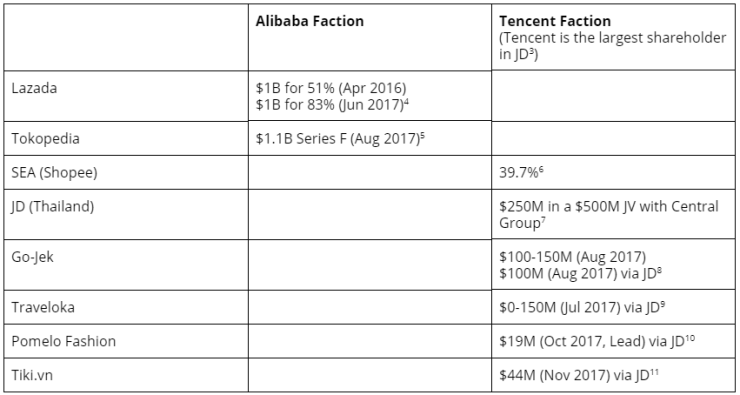 “Is there a land grab right now for these kind of assets? I think in the land grab they [Tencent] are following us. They are seeing that we have positioned ourselves very well, and they’re sort of playing a catch up game. So what we want to do is, since we already have our positions, is to work with local entrepreneurs.” — Joe Tsai, Alibaba Vice Chairman, in speaking with Bloomberg.

With both Tencent and Alibaba market caps at all-time highs, we expect this trend to continue throughout 2018 with both sides gobbling up more local companies across the ecommerce ecosystem and upping shares in existing ones.

2. Facing slow organic growth, Amazon will acquire a company to fast-track its ecommerce expansion in the emerging region

Amazon’s entry into “Southeast Asia” was the biggest surprise and non-surprise at the same time.

A non-surprise because Amazon’s long-awaited and rumored soft-launch into Singapore was widely covered by the media even before the company’s Prime Now services officially became available on July 26, 2017.

A surprise because Amazon’s expected tour-de-force across the region ended before it even started.

Amazon fanboys celebrated the initial launch of a scaled down, poor man’s version of Amazon — Amazon Prime Now — offering a…

Is the CPTPP (rebranded Trans-Pacific Partnership) a risky gamble?