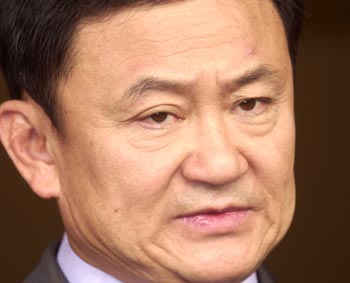 Ex-premier Thaksin Shinawatra said last night that he would continue his legal fight in Thailand “till the end” before taking his fight overseas to the International Court of Justice, referring to an appeal against Friday’s court verdict seizing part of his assets.

In January 2009, the overall economy in Thailand continued to contract from the same period last year, with continual large contractions in manufacturing production and export. Private consumption and investment trended downward, in line with a considerable drop in import. Furthermore, major crops production and price continued to decelerate, resulting in a slowdown in farm income. Nevertheless, tourism sector observed a smaller contraction. External stability remained sound with high international reserves as well as trade and current account surpluses following a marked decrease in import. Regarding internal stability, January’s inflation in Thailand turned negative
for the first time since October 1999. Even though the unemployment rate remained low, manufacturing employment continued to decline.

New Prime Minister Abhisit Vejjajiva’s government has responded to the crisis with vigorous fiscal pump priming, including direct cash injections into the grass roots economy. With public debt at 23% of GDP, international reserves at US$110 billion, and 2008 balanced budget, the government arguably has plenty of fiscal room to maneuver.

Thaksin to continue legal fight ’till the end’

Labor experts note that private sector union membership rates run at less than 5%, diminishing the risk of organized protests against factory and service sector layoffs. So, too, will an unemployment insurance scheme implemented in the wake of the 1997-98 Asian financial crisis and a recent government decision to expand Social Security Fund compensation for unemployed workers to eight months from 6.5 previously.
Meanwhile a new government small business loan program for unemployed workers requires that the recipients return to their home provinces to receive the funds. Still there are early indications that the government has not committed enough resources to tide over the rural grass roots sector. Aggrieved farmers in northern Lampang province in late January blocked roads and protested in front of the provincial hall on complaints they had not been involved in a corn mortgage scheme.

Korn to lead mission to Japan during redshirt rally

For a few (million) Dollars more