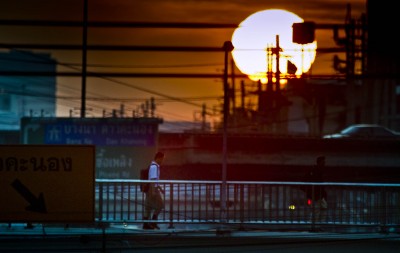 In Thailand’s traditional style of kick-boxing, the bout begins with ornate and time-consuming preambles. Offerings are made. Respect is shown. Brutal bursts of punches, high kicks, knees and elbows follow. It is fast and furious combat that rewards total commitment once the fight begins.

As a public spectacle of martial prowess, Thai kick-boxing offers some insight into the formidable capacity for violence which can lurk in the corner of the easy-going Thai smile.

In 2010, the fighting was not confined to the kick-boxing ring and smiles have been hard to find.

This was a year when the inability of Thailand’s political elite to broker a democratic compromise saw pent-up social and political frustrations coalesce into blood on the streets. Students of Thai history must gaze all the way back to 1992, or 1976 and 1973, to consider such emblematic or violent events.

Last year, I suggested that ‘2010 may well be the year when the battle for political and royal power is forced out of the shadows and into public consciousness, once and for all’. This cautious prognosis has sadly proven correct.

The year began ominously with massed Red Shirt protests in central Bangkok. While notionally loyal to deposed former Prime Minister Thaksin Shinawatra, the ‘Red’ side of Thailand’s colour-coded political landscape sought to voice a broad range of social and economic frustrations. Outrage at the lack of democratic reform motivated huge convoys of protestors to descend on the capital where they brought traffic to a standstill.

Then, from March 2010 until the protests ended in the violence of May, the Red Shirts besieged strategic intersections in an effort to disrupt the machinery of government and commerce.

The government of Prime Minister Abhisit Vejjajiva, no doubt hoping that Red Shirt resentments would just melt away, was nevertheless forced into a tense confrontation. The initial round of violence in April saw 25 people killed, including an Army Colonel and some of his subordinates.

After that bloodshed, the proverbial ‘gloves came off’ in an increasingly no holds-barred showdown. For Thais who pride themselves on tolerance, restraint and hospitality, the events that followed where a shock to the nation’s carefully constructed self-image.

As Seh Daeng crumpled to the ground, it became apparent that the crackdown was about to begin. Courageous Bangkok-based photo-journalist Nick Nostitz provided harrowing images showing Red Shirts with sling-shots taking heavy fire from government forces.

Others on the Red Shirt side armed themselves with more substantial weapons. Some also set out to retaliate against the crackdown by attacking symbols of power and privilege around Bangkok. Arson marked the final hours of the protests as Red Shirts sought to attack their enemies’ real estate.

In total, 85 people were killed and over 1000 were injured during these months of bloodshed. Hundreds of Red Shirt protestors and leaders were also locked up. Many remain behind bars.

Once the immediate crisis was over, the government of Prime Minister Abhisit moved quickly to neuter public disquiet. A campaign of ‘reconciliation’ was the chosen tonic. It failed, unsurprisingly, to salvage the reputation of a government that has continued to face opposition in the provincial heartlands where Red Shirt politics draws its primary support.

Until a national election is called it remains impossible to judge just how much support the government may have retained. Is it enough to hold on to power?

In 2011, there is a chance that the government will call an election. But regardless of the outcome of any such election, the violence of 2010 demonstrates, in stark and sometimes horrifying terms, just how deep the divisions in Thai society have become.

Arguably the most important fault line concerns the monarchy. Critical comments about its institutional role have become ever more public and vociferous. A republican fringe among the Red Shirts maintains its rage against royal prerogatives.

Follow this link to read the rest of the story:
Thailand in 2010: When the royal rumble turned blood red

Australia: a country racked by division and drift