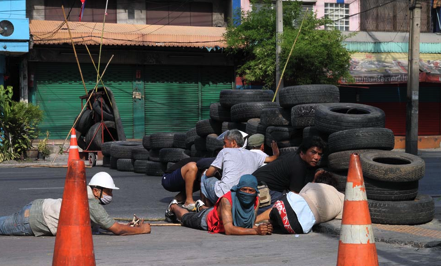 In 25 October 2009 I went to northeast Thailand, this time to the village of Nong Wua So, about 40 kilometres outside the city of Udon Thani, to observe a red shirt rally: village-style. When I arrived in the early afternoon the action had not yet begun. Soon after, many people began arriving from surrounding villages. Around the rim of the rally area were food stalls, and several large trampolines where children jumped around for a few baht each. Kwanchai Paipanna, the charismatic leader of the Udon Lovers, a local red shirt group, and organiser of the rally, was already there, sitting in a tent close to the stage. He talked with red shirts and police officers.

A high-ranking officer asked Kwanchai to accompany him to visit the abbot at a famous local temple. I was invited too. Several police officers and red shirt guards came along. Inside, the abbot blessed the rally, and presented us with rare amulets. One of the guards said to me, with a huge smile, that he had wanted this particular amulet for a long time.

By sunset the rally site quickly filled with 2000 to 3000 red shirts. Entire families arrived. Local politicians spoke on the stage, Kwanchai made his points, and even exiled former Prime Minister Thaksin Shinawatra made a phone-in. There were Look Thung and Mor Lam singers belting out their peculiar mix of folk pop, accompanied by Hang Kueang—the scantily dressed dancers so typical of provincial concerts.

The following day we went to Ubon Ratchatani, a few hours south of Udon Thani. Kwanchai Paipanna was driven by a huge police officer who served as his driver and bodyguard. While driving he kept his gun next to his seat. In a slightly derelict resort, about one hour away outside town, a conference of local red shirt leaders from all over the northeast took place. The hosts were singer-turned-politician Arisman Pongruangrong and Suporn ‘Rambo Isaarn’ Attawong, a former Khorat Member of Parliament under the deposed Thai Rak Thai government.

Kurt Pelda, correspondent of the Swiss Neue Zürcher Zeitung, and I were the only journalists in attendance. Nobody else was paying much attention.

More recently, on 30 January 2010, a red shirt rally in Khonkaen had more than 100,000 protesters, and the following day an event in Ubon Ratchathani drew between 50,000 and 60,000 red shirts. These events were not reported by the Thai mainstream media; not on television or in the newspapers. Only Nirmal Ghosh from Singapore’s Straits Times and Marvaan Makan Makar from IPS wrote about the events when they found out about them; their reports led to many discussions in the Thai political blogosphere.

Today I don’t even remember how many ‘small’ red shirt events, such as fundraisers for community radio stations, and concerts I have photographed where I was the only independent journalist present.

Late in 2005 and throughout 2006, until the military coup, the situation was quite different. Every People’s Alliance for Democracy (that is ‘yellow shirt’) event was covered by dozens of journalists, both local and international, both employed and freelance. But it was already apparent way back then that discrepancies between reporting and reality existed. Most international journalists hung on the lips of yellow shirt leader Sondhi Limthongkul’s masterfully prepared media sound bites about corruption and democracy yet ignored the extreme nationalism expressed on stage.

Not too many journalists made their way to the pro-Thaksin camp at Chatuchak Park in Bangkok. These government supporters were mostly portrayed as hired stooges, absent of political conviction. There is no doubt that many such opportunists were around — at the time I had friends from my neighborhood who used the camp as a welcome source of easy income. Nevertheless, many others, especially those who travelled to Bangkok from distant villages on their small tractors, argued quite convincingly why they supported Thaksin. The reasons cited were more or less the same as today: they appreciated the many programs aimed at connecting their villages to Thailand’s economy. These are the same policies that were widely denounced as ‘populist’ in the lead-up to the 2006 coup.

After that coup, and especially when it became clear that no blood was shed, the international media soon lost interest. I remember the largely unreported early anti-coup protests at Sanam Luang, the expanse in front of Bangkok’s Grand Palace. The crowds they drew were sometimes a few hundred protesters. But their protests grew and then culminated in the post-coup period with the clashes at the residential compound of the Privy Council Chairman, General Prem Tinsulanonda. At that time there were only five foreign journalists, including me, who were present and witnessed parts of the clashes.

Generally speaking, the media as a whole, with few exceptions, completely missed the beginning of what may turn out to be the most important recent change in the Thai socio-political landscape. The quality of reporting on the red shirts still suffers from this oversight. There are, of course, reasons for this. The local media is under subtle but strong pressure. Several local journalists have told me that they would love to be able to work the way I do, and write what I write. They have said that if they did, they would be attacked as red shirt supporters, which would have serious consequences for their professional future. Not many local journalists are in the position of Pravit Rojanaphruk from The Nation, who, as an Oxford graduate from a good family, can afford to write according to his conscience and the facts he gathers.

For Western journalists the situation differs in some important ways. Simply, there is no money in Thai political reporting. If you cover the conflict in depth, I’d advise you to forget about earning a proper income. Western media, already in crisis with tremendous budget cuts, will not spend any money on Thailand’s problems while there are much larger stories such as Afghanistan, Iraq and Britney Spears’ mental state. Larger networks have tried to report as well as they can, especially Al-Jazeera and the BBC, but when there is little space available for such coverage, there will be only a small budget to go around. The academic world has similarly ignored the red shirt movement, and to a large degree still does. There has been no long term field study done on the red shirts, and only now are there a few students, mostly foreign, who are researching the movement. Thai students—the few who care—are

Often cowed by the mostly yellow shirt academic establishment. In contrast, the blogosphere is very much alive. most valuable reporting is done on blogs. The natural problem is that blogs have little peer review, are often anonymous, and at times openly side with this or the other political faction. Even the few respected blogs such as New Mandala and Bangkok Pundit, and the critical news website Prachatai, are often discredited along those lines.

The few people who do report on the ground, and publish without a shield of anonymity, have to acquire a very thick skin. I was accused of being bribed by former Prime Minister Thaksin with a very large amount of money, for example, because of what I reported about the 7 October 2008 clash at Government house between police and yellow shirts, first published by New Mandala. My report contradicted the official version of events but it was soon translated and taken up by the Thai media. Jonathan Head, the former BBC correspondent in Thailand, ended up earning several lèse majesté charges for his reporting.

Some Thai journalists have even been physically attacked by members of both the red and yellow shirt movements, angered by the blinkered reporting by the Thai media. taken together this has led to a vacuum in knowledge about Thailand’s ongoing political battles, and wider socio-political conflicts in Thailand.

Almost every aspect of red shirt grassroots support in the provinces and Bangkok remains unstudied. Even the fact that there is ideological grassroots support is still highly disputed. How is it possible to analyse future developments and potentially fundamental changes in Thai society when elementary aspects go unstudied and unreported?

Nick Nostitz is a Bangkok-based photo-journalist whose work is regularly featured on the New Mandala website. His most recent book is Red vs Yellow: Thailand’s Crisis of Identity (2009).

Related Topics:punditred shirts
Up Next