At least 102 people were killed and more than 2000 were injured in the confrontations between members of the United Front for Democracy against Dictatorship (UDD), known as the “Red Shirts”, and the military, according to the organization.

Both sides committed acts of violence, according to a Human Rights Watch report published in May 2011. 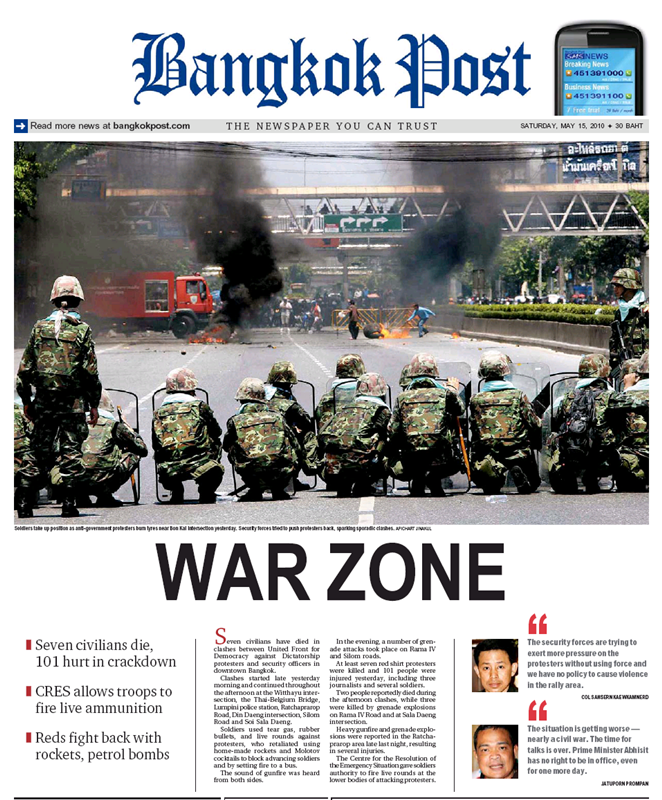 The military used excessive and unnecessary force, and the armed militants of the Red Shirt movement, known as the “Black Shirts”, also engaged in the fighting.

The ruling Pheu Thai Party and coalition partners proposed on March 27 an amnesty for all of those who were involved in the 2010 violence, including leaders and supporters of political movements, politicians, government officials, and members of the security forces. However, families of victims wish for justice and accountability.

Volunteer nurse Katekamol Akhard, known as “Nurse Kate”, was a Red Shirt supporter who was killed during the dispersal in Ratchaprasong while assisting an injured comrade.  Her family was not supportive of the proposed reconciliation, as this would mean impunity for the perpetrators of criminal acts on both sides.

“Truth is the first thing before reconciliation. Not amnesty”, her brother said. “Those who commit murder must be held accountable.”

However, so far, only UDD leaders and protesters have been charged with criminal offences, while no military personnel or government official has been charged or arrested. According to the Justice Ministry, 600 people have been charged, 290 arrested, and 53 remain in prison. The Truth for Reconciliation Commission of Thailand, established by the previous government of prime minister Abhisit Vejjajiva, has now, under Yingluck’s government, focused its investigations on cases involving soldiers.

According to HRW, the military does not want these investigations to go further

Despite initial progress by the commission, only 16 cases have so far been sent to the Department of Special Investigations (DSI) to the prosecutor to launch post-mortem inquests. The process has been slow, and to Adams, this indicates that “the military does not want these investigations to go further”.

Meanwhile, financial compensations offered by Yingluck’s government have been welcomed by most families of victims, although many are firm in saying they do not want to be “bought off”. “Compensations are necessary, but not sufficient,” said Nurse Kate’s brother.

Indicating the political forces acting behind the scenes, her family has suffered pressure to drop the charges, and former prime-minister Thaksin has told them (WHEN) “we have to listen to the greater good. And the minority (voice) should make a sacrifice”.

Although some analysts suggest the 2010 incidents represent a power struggle between then prime-minister Abhisit Vejjajiva, who would have been commander-in-chief of the armed forces at the time of the  protests, and former prime-minister Thaksin Shinawatra, who has ample support of the Red Shirts and has been a unifying symbol for the movement, Adams believes these individuals will not be held directly responsible for the violent acts perpetrated by the lower ranks, unless there is evidence proving they were involved in the abuses.

Significant speculation remains about the role of the Red Shirt armed militants, popularly known as “the black-shirts”. Video footage of these militants in action, some released by Human Rights Watch, indicate they  were men who had undergone military training.

Nurse Kate’s brother said that the divisions that have split Thailand are not only in the political domain, but are within society, including all groups of people, and the “practice of blaming the other side must be put to an end.”

Thailand and OIC Denounce Violence against Innocent Civilians in the South