More than half of the Thai people disagree with a proposed blanket amnesty for leaders and politicians involved in the 2010 political unrest, according to an academic poll released today.

Bangkok University’s research centre (the Bangkok Poll) said 61.0 per cent of 1,195 respondents in Bangkok and the metropolitan area oppose pardoning hard-core leaders who instigated the months-long rally while 62.7 per cent objected to amnesty for the politicians involved in the upheaval. 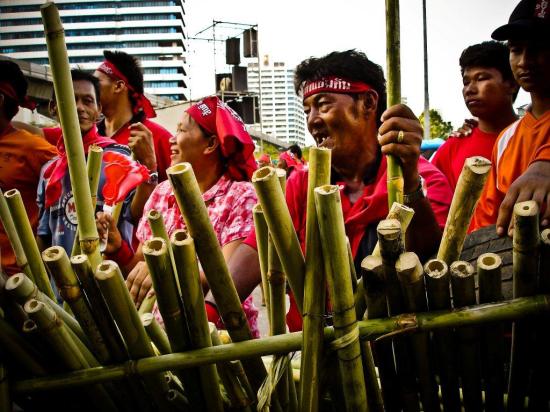 Regarding amnesty for those who joined the demonstrations, 45.4 per cent agreed while 34.2 per cent disagreed.

Asked whether the Amnesty Bill should be promulgated, 55.3 per cent said the bill was for the interest of the powers that be and some political groups, while only 28.7 per cent agreed that the bill was aimed at national reconciliation.

Asked whether a Democrat-led demonstration against the Amnesty Bill would stop its promulgation, 46.8 per cent did not think so while just 11.6 per cent believed its impact would prevent enforcement of the bill.

On possible violence and related activities from a Democrat-led demonstration, 26.4 per cent predicted road closures and demonstrators’ movements to various locations, 24.4 per cent believed that roads would be closed, that huge numbers of people would join the demonstration which would drag on, and 15 per cent painted a grim picture of cracking down on protesters with force.

Welcome to the Republic of Thaksin