The secretary-general of the United Nations Mr Ban Ki-moon yesterday called for an immediate end to escalating violence in Thailand, and urged authorities to bring those responsible to justice. 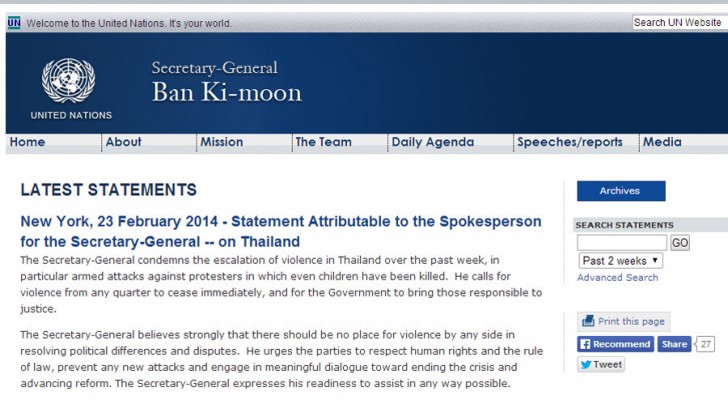 In a statement by his spokesperson in New York, the UN chief  condemned the aggression, which included armed attacks this weekend against anti-Government protesters. At least two children were killed in the attacks.

“The Secretary-General believes strongly that there should be no place for violence by any side in resolving political differences and disputes,”

his spokesperson stressed, adding that Mr. Ban is ready to assist in any way possible.The top UN official has called on all sides to respect human rights and the rule of law, prevent any new attacks and “engage in meaningful dialogue” toward ending the crisis and advancing reform.

Concerned by rising political tensions in Bangkok, the United Nations Secretary-Geneneral Ban Ki-moon called on all sides to refrain from violence, respect the rule of law, and to “resolve their differences through genuine dialogue and peaceful means.”

In a statement issued yesterday, it said the UN chief has followed the events in Thailand closely over the last few weeks and is concerned by the rising political tensions in Bangkok.

He called on all sides to exercise the utmost restraint, refrain from the use of violence and to show full respect for the rule of law and human rights.

Moon also said in the statement that he was concerned by reports of Government institutions being occupied by the protesters.

He strongly encouraged all concerned to resolve their differences through dialogue and peaceful means.

Why Thailand shouldn’t be afraid of the f-word