Most observers were surprised when former Thai prime minister Yingluck Shinawatra did not appear in court on 25 August for the final day of her trial.

A rumour mill developed, with claims and counter-claims about where she was and who was responsible for her no-show, with many claiming a deal was done with the ruling junta.

If Yingluck really has gone into exile — and this remains unclear — she travels a well-worn path in Thailand. From at least the 1890s, the flight of senior royal political and then political figures has been common.

Yingluck’s elder brother Thaksin fled in 2008 when he faced two years in jail. Others fled following the 2014 coup, most being politicians and activists pursued by the military regime. 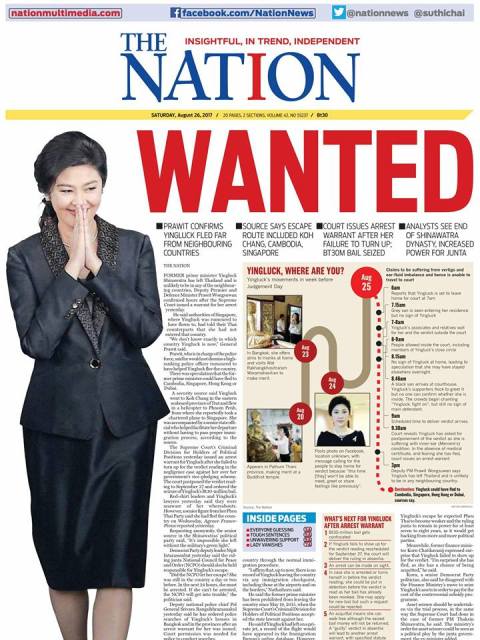 By contrast, Yingluck neither fled following the coup nor in the years that followed. She returned several times from overseas trips and appeared at each court sitting, vowing to fight her case to the very end.

Speculation rages about Yingluck’s whereabouts, the fate of her Pheu Thai Party, the Shinawatra family and red shirts, the role of the junta in her no-show and more.

But what does Yingluck’s sudden disappearance from the political stage tell us about Thailand’s political situation?

A defining feature of the military regime has been its deep politicisation of the judiciary.

Over the years since Thaksin came to power in 2001, the judiciary has increasingly inserted itself in political decision-making, and its political role has widened and deepened under the military regime.The junta has used the courts to uproot the so-called ‘Thaksin regime’.

On the same day that Yingluck failed to appear in court, 20 politicians and officials associated with her government and the rice scheme were convicted and received massive sentences of up to 42 years in jail.

Before this, several senior Pheu Thai Party members had been jailed or fined, while others still await trial and expect similarly crippling sentences.

When Yingluck failed to appear, she faced charges variously described as malfeasance, dereliction of duty or criminal negligence related to her government’s rice-pledging scheme. Her assets had already been seized.

But current junta leader and prime minister, General Prayuth Chan-ocha, scoffs at notions that he could face similar charges for some of his actions in office. He can do this because his decisions are protected by decrees and laws that his puppet legislature has affirmed.

In another case against Yingluck, two weeks before the 2014 coup and under huge pressure from the pro-military People’s Democratic Reform Committee (PDRC), she was removed from office by the Constitutional Court. Her ‘crime’ was reassigning a senior official appointed by the previous government when she took office in 2011.

Earlier, the Supreme Administrative Court ruled that the transfer was legal but ‘unreasonable’, which led to the coup and the mountain of subsequent judicial actions.

Yet when the military junta came to power, General Prayuth removed or transferred hundreds of officials in a purge of anyone considered politically unreliable. Those removed were replaced with officials who gave their allegiance to the junta.

What was ‘unreasonable’ in a single instance for Yingluck was unchallenged for the junta on a massive scale.

Such double standards are also evident when Thaksin and Yingluck’s opponents face the courts. Just days after Yingluck’s missed court appearance, former premier and leader of the pro-military Democrat Party Abhisit Vejjajiva and his former deputy Suthep Thaugsuban, who was also the leader of the anti-Yingluck PDRC, went before the Supreme Court.

That court dismissed the notion that the two be charged over their responsibility for some 100 deaths in bloody crackdowns on red shirt protesters in April and May 2010.Once the junta came to power, earlier efforts under the Yingluck government to hold Abhisit and Suthep accountable were undercut.

The National Anti-Corruption Commission soon ruled that they had no case to answer. Now all courts up to the Supreme Court have rubber-stamped that decision. Despite several courts having ruled that soldiers were responsible for many of the 2010 deaths, no officials of the organisations responsible have been held responsible.The junta rightly views Yingluck as a potent and popular symbol for the opposition.

Putting her out of political action and seizing or freezing Shinawatra assets were important aims for the junta when it seized power. Now, as it prepares for another round of military-guided democracy in Thailand, this neutralisation of opposition, its purge of officials and the reconstruction of electoral rules and the constitution makes it virtually impossible for a pro-Shinawatra party to take and exercise power.