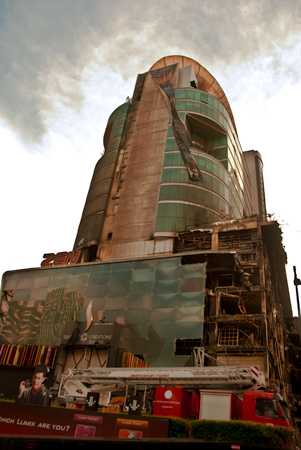 The real estate business in Ratchprasong area (central Business and upscale Shopping district of Bangkok) has slumped by over 50% in the past few months due to the recent political rally in the capital of  Thailand, according to the Real Estate Information Center (REIC)

Real Estate Information Center Director-General Samma Kitsin revealed that the condominiums situated within the one-kilometer radius of the commercial district of Ratchaprasong had been severely affected by the recent UDD rally since April. Many companies have to relocate their sale offices while others have to offer special discounts and promotion packages to customers in order to sell out the remaining units.

On the big picture, condos in Ratchaprasong are likely to face difficulty in development due to the political factor that hinders customers’ decision and the rising building cost | Picture : Camilla Davidsson

The sale figures in April in the downtown Bangkok district plunged more than 50%. Some projects had absolute zero sales during the period because no one could enter the area.

via Real Estate sales at Ratchaprasong plunges 50% due to recent rally : National News Bureau of Thailand.