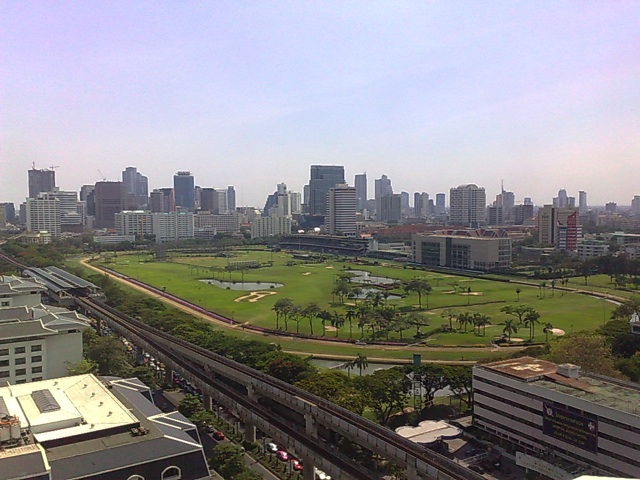 Views over the Royal Bangkok Sports Club from Ratchadamri Road Scene of some of the fiercest fighting in May’s bloody crackdown and home to some of Bangkok’s finest establishments, including hotels the Hyatt Erawan and Four Seasons and the soon to be completed St Regis Residences, Ratchadamri Road in the centre of Bangkok, is set for a new six-star entrant.

The Bangkok Post has reported that units will be sold at between 130,000 to 140,000 baht a sq m., sixty to seventy thousand less than other neighbouring developments as the plot sits on Crown Property Bureau (CPB) land.

The new developers are confident that with only 15 years remaining on the current lease the CPB will agree to an extension. Under a pre-existing contractual obligation, all the office space will be used by the Debsirin Alumni Association, formerly an owner of the plot before Maneeya Group took it over.

Ground breaking on the original plot took place in 1994 before construction was stopped due to financial difficulties prior to the 1997 Asian economic crisis and despite the interest of another investor several years ago has remained vacant.

Overlooking the Royal Bangkok Sports Club with unrestricted vistas east over the city, Ratchadamri Road remains one of the most coveted locations in Bangkok, bordering Bangkok’s central commercial shopping district.

The announcement of this development also comes at a time when another vacant building, abandoned since 1997, adjacent to Bangkok’s elevated Skytrain station Nana and situated on prime Sukhumvit real estate, has been demolished ahead of a new development.

The taxation situation has actually improved the conditions for purchasing property in Thailand, and if property prices do dip slightly as a result of the current situation it may actually be a good time to buy as there is a very real possibility Thailand property will regain its golden outlook soon.