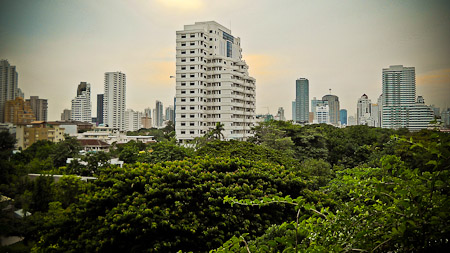 09/10/2010 : SET-listed Dusit Thani Plc (DTC) will set up a property fund with a total size of 4 billion baht with three Dusit hotels as the underlying assets, according to chief executive Chanin

06/10/2010 : The owner of Chatrium Suites Bangkok is interested in setting up a hotel management company after the hotel has firmly established itself.

05/10/2010 : Bangkok’s Phaya Thai district remains the most popular area for condominium development thanks to its convenient location and access to the BTS and Airport Rail Link, says Plus Property Co.

02/10/2010 : Average land prices in Greater Bangkok have risen by 4.4% from last year, according to the latest survey by the Agency for Real Estate Affairs (AREA).

30/09/2010 : The listed developer Sansiri Plc has revised up its 2010 sales target to 25 billion baht and increased the land acquisition budget by 40% to 10 billion baht as it plans to tap the lower-priced housing segment.

29/09/2010 : Phuket’s residential property market should continue to improve in line with the global economic recovery given no new political turmoil, according to new research from Knight Frank Thailand.