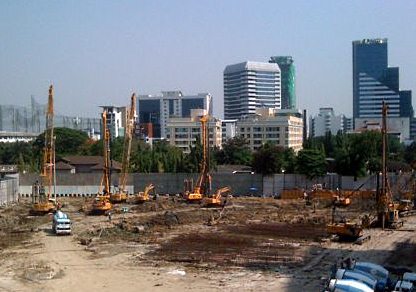 A property bubble has begun to form this year and it could burst in 2012 or 2013 once the large number of units launched this year are completed, warns the property consulting firm Agency for Real Estate Affairs (AREA).

Of the total new units, 55% are condominiums, 26% are townhouses, 14% single houses and the rest are other types of developments. In terms of price, 57% of new offerings are priced below 2 million baht each while those priced above 5 million baht accounted for around 10%.

“If the market next year continues to grow as aggressively as this year, it may cause the bubble to burst in 2012-13 when a large number of projects are completed and that would lead to an oversupply,” said company president Sopon Pornchokchai.If the bubble burst, he said, a sharp drop in resale prices and rents could threaten some financial institutions that extended high-percentage mortgage loans relative to asset values. The result could be trouble for shareholders of those financial institutions as well as the overall Thai economy.

However, a bubble can be prevented if developers are cautious in launching new projects and financial institutions offer credit lines at appropriate rates, said Mr Sopon.

He urged the government to improve confidence among homebuyers that they would receive their units or get down payments back through compulsory escrow accounts rather than the current voluntary approach.

In a related development, a poll of 50 economists in 22 public and private organisations by Bangkok University shows that 60% of them saw signals of a bubble in the property market, thought it was not as obvious as the signals prior to the 1997 economic crisis.

Asked what they thought might occur if the Bank of Thailand had not acted to impose curbs on mortgage lending, 28 economists saw a low possibility of having a property bubble next year, but 17 had a contrary opinion _ 10 in this group viewed that the central bank’s measure was too weak to solve the bubble problem.

A bubble is unlikely in the Thai property market as prices have risen naturally the past three years, insists the Government Housing Bank (GH Bank), saying more housing loan applications will flow to the state bank if the sizes of loans offered by commercial banks are curbed.

GH Bank’s outgoing president Khan Prachuabmoh said the definition of a bubble was when real estate prices rise at a very high percentage for three to four years consecutively.

“What I see the past three to four years is a natural increase in real estate prices at a usual rate. Nothing is unusual and there is no bubble in the property market,” he said.

He said financial institutions were able to monitor potential customers with data from credit bureaus and could spot speculators. “We insist all of our customers are people buying a house to live in, not speculators. These are mid- to lower-income earners that do not make enough to speculate.”

Despite the fear of a possible oversupply and the potential for an asset bubble, activity in Asia’s real estate investment markets rose significantly in the third quarter amid a noticeable improvement in investor sentiment, says property services company CB Richard Ellis (CBRE).

Most of the region’s major real estate markets regained momentum after the brief period of uncertainty following the onset of the euro zone sovereign debt crisis, said CBRE.

Direct real estate investment in the region, excluding land transactions, grew by 53% quarter-on-quarter to an estimated US$18 billion. Overall transaction volume in the first nine months reached $46 billion, double the figure in the same period of 2009.

Investors gravitated to the most liquid locations. Hong Kong was the most active market, accounting for $5.2 billion or 29% of the total regional volume, followed by Singapore and Japan at 22% and 20%, respectively.