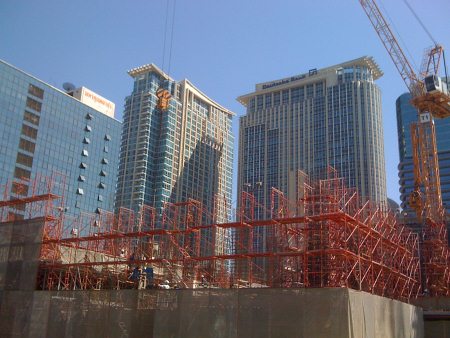 Colliers Thailand has a new study on Bangkok condominium market, it shows that concerns regarding an overheating condominium market supply were allayed in Q1 2011 with a fall of around 46% of new launches compared to  the previous quarter.

According to the latest Condominium Market Report from Colliers International Thailand approximately 10,800 units were launched in Q1 2011 with slightly more coming from suburban Bangkok .

The six months prior to Q1 were a frenetic time for the condominium market and Antony Picon, Associate Director of Research at Colliers believes this represented an aberration rather than a trend.

“Many of the launches were tapping into the first time buyer market with small unit sizes and affordable prices and the reaction was similar to any new high profile product hitting the market  for the first time such as the ipad”, he said.  “After a while things steadied and become more sustainable and that is what we are seeing with condominiums now”,

Patima Jeerapaet, Managing Director of Colliers, stated that the recent Bank of Thailand’s loan to value requirements and the steady rises in interest rates went a long way to restrain the breakneck pace of launches.

“There was considerable media attention at the end of last year regarding the high number of launches and prudent action has been taken that allows the market to consolidate rather than come to a complete halt and this can only be good for the market in the long term”,

Increasing land prices and construction costs are creating pricing pressures and it will be difficult for developers to pass these on the buyers, claimed Mr Picon. “Unit sizes can only be reduced by so much and already there is talk of action to limit this so any future price rises will only be possible with strong economic growth translating into higher wages”, he said.

Mortgage for foreigners? Sorry, not in Thailand