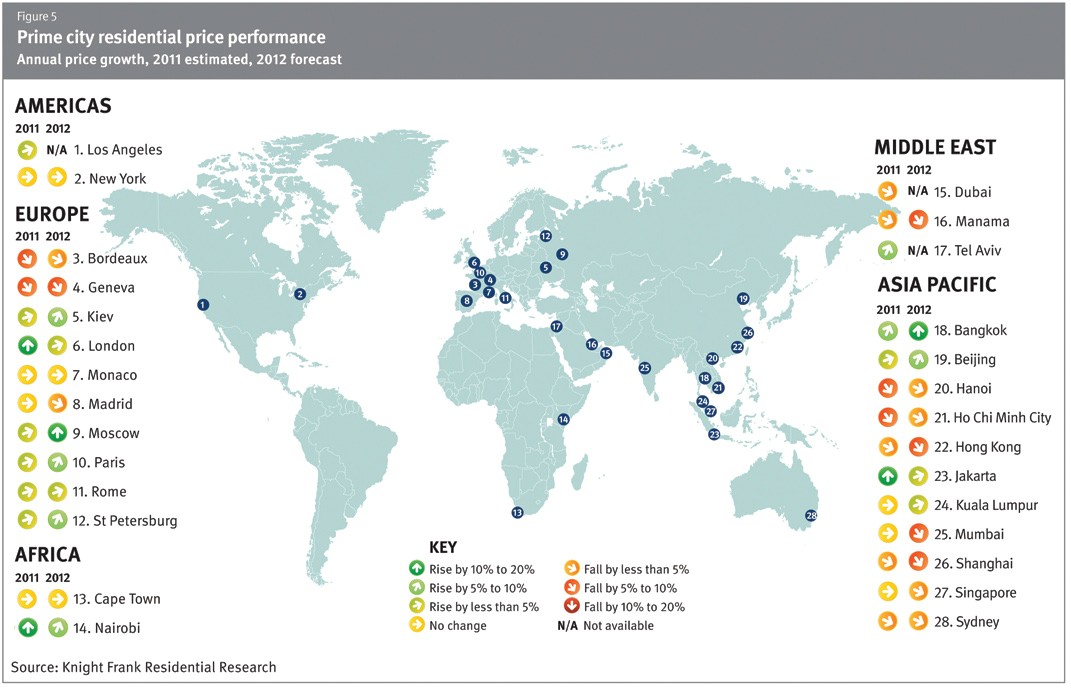 Knight Frank Prime Global Forecast reveals that after two years of growth, the global property markets are starting to cool down, sending prices tumbling. But the situation will not look the same everywhere.

After two years of growth the heat is starting to come out of the world’s prime residential markets, particularly in Asia, according to the results of the latest Knight Frank Prime Global Forecast.

Prices are predicted to fall in 44% of the cities monitored during 2012, with a similar amount likely to experience price rises. Values are expected to remain unchanged in in 12%.

The slowdown in luxury price performance is most evident in Asia, with 60% of cities predicted to see a fall in values. Growth has been curtailed by government fiscal policy measures designed to reduce the risk of spiralling inflation and over-heating in property markets.

Also Bangkok is still showing signs of resilience, the slowdown in luxury price performance is most evident in Asia, with 60% of cities predicted to see a fall in values

The eurozone crisis is also expected to weigh on prime property prices in nearly two-thirds of the cities included in our forecast.  Political and security issues present the greatest risk to  housing markets in the Middle East and Africa.

Interest rates, high inflation and consumer debt are considered the smallest threat to the world’s luxury housing markets. This reflects the affluent, more equity-rich profile of buyers in this sector of the market.

Given the global economic turmoil, it might seem surprising we are forecasting price rises in nearly half the cities. In many cases the prices are being supported by a lack of quality properties for sale. We expect this trend to continue, particularly in London, Paris, Moscow, Nairobi and Kuala Lumpur.

In some locations, this lack of supply is being compounded by the continuing flow of capital from the world’s troubled regions and a desire by the wealthy to target property and other real assets over financial products.

Liam Bailey, head of research at Knight Frank, said: “There are three key themes that will determine the performance of prime city markets in the short to medium-term – the scale of global wealth generation, the ongoing search for ‘safe-haven’ investments and the growing divide between the prime markets in the West and the rest of the world.”