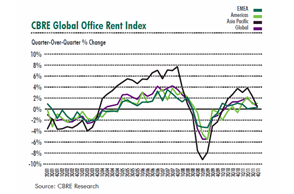 According to the world’s largest commercial real estate advisor CBRE, the CBRE Global Office Rent and Global Capital Value Indices held steady in Q4 2011, increasing by only 0.48% and 0.44%, respectively. Compared with year-end 2010, the indices measured increases of 5.0% for Global Rent and 8.2% for Global Capital, reflecting stronger growth in the first half of 2011.

“We believe the recoveries in commercial real estate are only delayed not denied, as new construction pipelines are sparse except in a select number of markets.”

The uncertain global economic backdrop continued to contribute to occupier and investor caution, thus diminishing the strength of the global office commercial real estate recovery. While both global indices continued to edge upward slightly, the quarterly growth rates were notably below the rates previously seen in the first half of 2011.

The CBRE Indices were created by CBRE Research. The Global Office Rent Index is comprised of data from 123 cities around the world. The Global Capital Value Index uses the same sample for EMEA and Asia Pacific, while the Americas data is derived from the National Council of Real Estate Investment Fiduciaries (NCREIF) and is not built up city by city the same way as is the rent index data. The base period for the indices is Q1 2001.