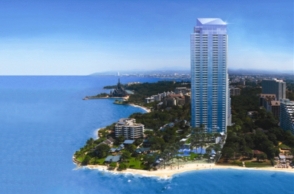 ”Pattaya needs to get ready for the AEC. If we wait until 2015, it may be too late as other countries in Asean are now preparing for the single regional common market,”

Pattaya would propose the idea to help promote investment in Thailand, he said.

Pattaya is a special administrative area.

The policy should be applied as a pilot programme in Pattaya and Phuket, major tourist destinations that have their own administrative authority.

The foreign quota on condominium ownership is regulated by the Interior Ministry at 49% of saleable space. Allowing a higher limit would help developers already up against their foreign ownership quota sell more units.

If the limits are increased, units can be sold to foreigners if Thai buyers cannot be found.

Mr Ronakit made the comments at a seminar on the Chon Buri and Rayong housing markets in 2012, adding that Pattaya’s mayor would discuss the condominium ownership issue with the ministry at the next meeting.

The Pattaya property market has been booming since last year. A large number of Russian tourists have been visiting Pattaya arriving via chartered flights landing at U-Tapao Airport.

Pattaya benefited from the floods last year as Bangkok residents relocated temporarily to the city.

However, an influx of people during that period made it obvious that Pattaya needs to improve infrastructure and develop mass transit.

High-speed trains from Bangkok to Rayong will help boost tourism in the eastern provinces as travel time will be reduced from two hours to 40 minutes.

A new 600-million-baht terminal at U-Tapao Airport will allow for a greater number of arrivals.

To support tourism and investment growth and to improve traffic flows, Pattaya City plans to widen the road along the beach by four metres.

It will also expand the width of the beach, which is today is only about two metres wide and is very close to the road.

The beach project, costing an estimated 338 million baht, will involve the transportation of sand from Rayong and the widening of the 2.7 kilometre long beach to 35 metres.

”We will make the beach 35 metres wide to show how good it is to extend the beach,” he said.

After the project is completed, Pattaya will pass zoning rules restricting the use of beach umbrellas and chairs to specific areas. These restrictions will increase the public space available for tourists to sit on the beach or sunbathe.

He said Pattaya was waiting for the approval of an environmental impact assessment report for the extension of the beach.

Lido Theatre to be Erased for New Shopping Mall