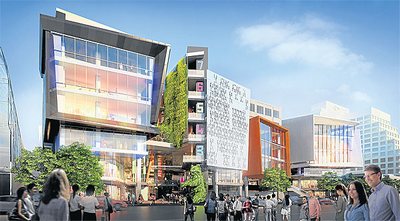 Chulalongkorn University will spend 1.8 billion baht to develop a new shopping mall on the plot that now houses Lido Theatre in Siam Square in 2014 after spending the same amount to construct Siam Square One nearby.

The perspective of Siam Square One, which is being built on the plot which used to house Siam Theatre.

Assoc Prof Permyot Kosolbhand, the university’s vice-president who supervises its Property Management Office, said the new retail project would be the second phase in its property development master plan.

“The university has the potential to invest itself but has to consider our capability and risk. If the risk is high, then we’ll form a joint venture with private operators,”

But for a prime location like the plots facing Rama I Road opposite Siam Center, it will invest on its own.

He said Siam Square, a trendy hangout for teenagers, has many thousands of tenants whose leases are 1-3 years.

Yesterday, the university launched Siam Square One with a construction budget of 1.8 billion baht. It will be located on an 8.45-rai plot where the Siam Theatre was formerly located before it was blazed. Construction will be completed in late 2013.

“In our master plan, we want to gradually undertake a facelift for all of Siam Square but we cannot do so at once as the existing tenants will face difficulties,” he said.

With seven storeys and two underground floors, Siam Square One will have a total construction area of 74,100 square metres. Some 32,600 sq m will be lettable area for 788 shops sized between 4.5-25 sq m.

About 60% of the space will be reserved for former tenants at the Siam Theatre mall, he said.

There will be an 850-seat theatre called Playhouse as the university opened bidding to lease it for nine years. Bidders include WorkPoint Entertainment and TV Thunder.

Assoc Prof Permyot said the university was waiting for approval from the cabinet on its two joint-venture plans: a mixed-use project at Charoen Phon Junction and a hotel in the Siamkit Building.

The Charoen Phon project will likely cost over 6 billion baht and received bids from two giant property groups: L&H Property and TCC Land. L&H offered a higher return, but the university wants an even higher number. A result will be announced next month.

Looking for Bangkok retail space to rent, contact us for more details.