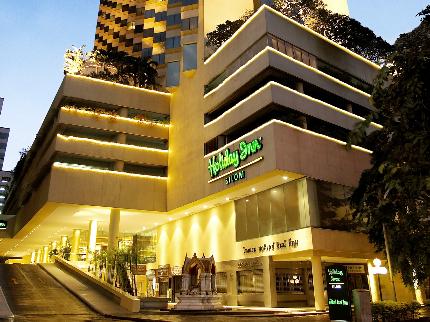 InterContinental Hotels Group (IHG) is cashing in on the fast-growing hospitality market in Thailand with an aggressive plan to double the number of its hotels and resorts here to 24 over the next five years, thanks partly to the implementation of the Asean Economic Community (AEC) in 2015, which will drive regional travel traffic.

Hotel Indigo will open on Wireless Road in Bangkok next year.

Clarence Tan, IHG’s chief operating officer for Asia and Australasia, said Thailand was one of the company’s strongest markets in Southeast Asia because it is a major destination for foreign tourists. With the establishment of the AEC, Thailand will benefit from the free flow of travellers. Also, the country has strong potential in medical tourism and the MICE (meetings, incentives, conferences and exhibitions) market.

The company has had one new opening so far this year, the InterContinental Samui Baan Taling Ngam Resort in March. The next openings this year will be the Holiday Inn Express Bangkok Siam, Crowne Plaza Phuket Panwa Beach Resort, and Holiday Inn Bangkok Sukhumvit 22.

In addition, the firm is studying such markets as Chiang Mai and Hua Hin for expansion of its network.

Last year, IHG opened 241 hotels globally, 10 of which were in Southeast Asia, including the first two Crowne Plaza properties in Vietnam and the second Holiday Inn resort in Thailand.

Given the growth in regional travel, demand for mid-scale hotels is on the rise. This is a business opportunity for IHG in Thailand, especially for the Holiday Inn and Holiday Inn Express brands, Tan said.

“With the increased demand for regional travel, we are well placed to address the demands of mid-scale-hotel travellers. However, we continue to compete in the upscale and leisure segments, both in Thailand and everywhere else,” he said.

Tan said China was one of the company’s biggest opportunities. As one of the largest international operators in that country, the group has established a strong foothold there, growing its business by two digits. IHG has created the Hualuxe brand to demonstrate pride in Chinese customs, specifically for that market. The company plans to encourage its Chinese guests to travel to Thailand.