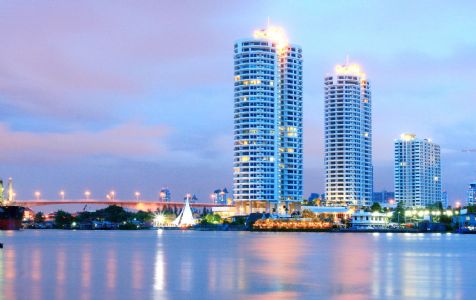 Offering views hard to beat in such a congested city, spots near the Chao Phraya are sure to receive increased attention from developers, which could lead to the area becoming a residential leader .Those of us in the property business are often asked what the hot locations for condominiums in Bangkok are.

The answer has always been areas that are within walking distance of a mass transit station or prime locations popular commercial areas such as Phloenchit, Langsuan, Sukhumvit or Sathon roads. While the above-mentioned areas are still desirable, one can look at locations from a different perspective, which is the view and open space a residence offers. In a metropolis with a population in excess of 10 million and congestion in central areas, a location offering an unblocked, panoramic or open view of attractive scenery is rare.

The locations offering the best views of the green belts remaining in the city include those overlooking Lumpini Park, the Royal Bangkok Sports Club, the Tobacco Monopoly lake, areas on Witthayu Road overlooking the embassies of the Netherlands, US and the UK, the Sathon area with views of the German, Austrian and Danish embassies, and Benjakiti Park.

Offering views hard to beat in such a congested city, spots near the Chao Phraya are sure to receive increased attention from developers, which could lead to the area becoming a residential leader

Any condominium developments offering views such as these are considered good investments with long-term capital appreciation, as land for development in these areas is now scarce. Another zone with some of the city’s best views, but that has not yet been developed extensively is the Chao Phraya riverside. Only recently have we begun to see a revival of interest from developers in riverside locations. Among the new developments and site acquisitions for large-scale projects along the Chao Phraya are the River, which is close to completion, and Asiatique the Riverfront on Charoen Krung Road.

Future developments that have been announced along the riverside include the Capella Bangkok Hotel and Residence, a mixed-use development currently in the planning phase and located near Shrewsbury International School; Menam Residence, to be developed by the owner of the Mae Nam Ramada Plaza Hotel; and most recently, a 35 billion baht iconic mixed-use development on a 40 rai plot between the Millennium Hilton and the Peninsula Hotel by a joint venture between CP Group, Magnolia Quality Development Corporation and Siam Piwat, the owner and operator of Siam Paragon, Siam Centre and Siam Discovery.

The areas along the Chao Phraya located within close proximity to some of the city’s main commercial districts include Charoen Krung and Charoen Nakhon. The distance from these riverside locations to the thoroughfares of Silom and Sathon is less than 10km. The areas that were historically Bangkok’s commercial centre range from Koh Rattanakosin and Songwad and along Charoen Krung Road down to Thanon Tok. Today, popular riverside locations have expanded to Rama III Road. The river in this area is more natural, overlooking 15 square kilometres of green belt, a preserved area called Bang Krajao.

85% of Chinese families own their homes