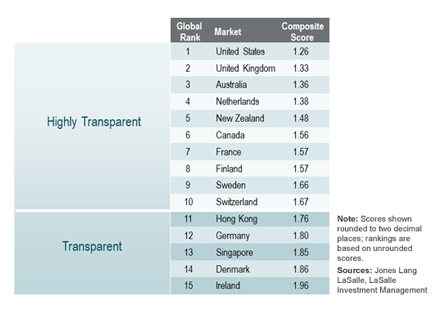 In 2010, when we last reported on real estate transparency in the immediate aftermath of the Global Financial Crisis, we highlighted a slowdown in transparency improvements in several markets as the real estate industry focused on survival rather than market advancement. In 2012 Thailand ranks 39 in Global Real Estate Transparency Index

Two years later, most developed markets have begun to recover from the recession of 2008 and 2009 and, while downside risks remain, the global real estate industry is in better shape than it has been for several years, reflected in renewed impetus to transparency improvements across the worlds real estate markets.

Our latest 2012 Global Real Estate Transparency Index highlights steady progress in the majority of markets during the past two years.

Nearly 90% of markets have registered an improvement in their transparency score since 2010, as the movement of capital and corporations around the world creates an even greater need for high-quality market information and performance benchmarks.

The United States ranks as the worlds most transparent real estate market in 2012, followed closely by the United Kingdom and Australia; New Zealand sits in fifth position and Canada is in sixth place. They are joined by several European markets – Netherlands 4th, France 7th, Finland 8th, Sweden 9th and Switzerland 10th, which together constitute the worlds Highly Transparent markets.

A re-ordering of these Highly Transparent markets, relative to earlier editions, is largely due to our more detailed approach to tracking market fundamentals and performance data series. However, the differences within this category are modest when compared to the large differences seen between this and the next tier of markets.