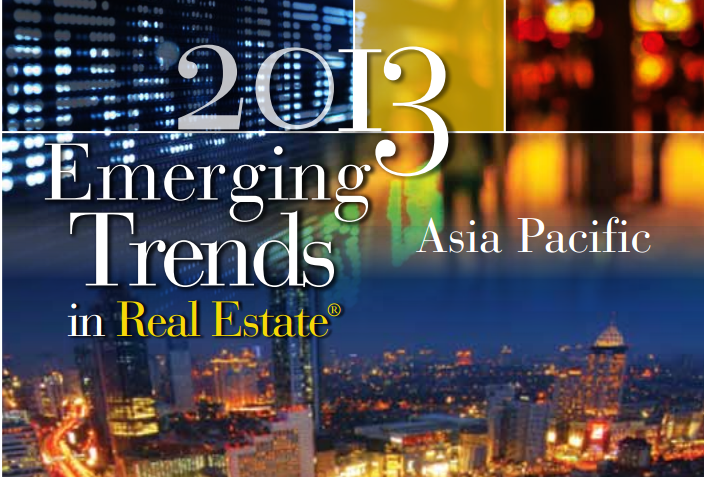 Shanghai, Beijing and several second-tier cities rank in the top ten cities for investment and development prospects in the Asia Pacific region, according to Emerging Trends in Real Estate® Asia Pacific 2013, published by the Urban Land Institute (ULI) and PwC.

The widely anticipated forecast provides an overview of Asia Pacific real estate investment and development trends, real estate finance and capital markets, and trends by property sector and metropolitan area. It is being released today at a program hosted by ULI Asia Pacific and PwC.

Shanghai is ranked as the second most favoured location for investment and fourth most popular for development in the Asia Pacific region. Beijing takes the seventh place in both rankings. In addition to the core markets in China, the country’s second-tier cities are placed in the top ten listing for both investment and development prospects. Chongqing, Tianjin, and Shenyang have become especially popular destinations.

Ranked 16th in investment prospects, and 11th in development potential, Shenzhen is beginning to enter the real estate limelight partly due to its status as a high-tech hub. Despite concerns about overpricing in some sectors in China, the report notes that it is not unusual for emerging markets to witness major price shifts, and that they must be viewed in the context of local market conditions.

For Asia Pacific as a whole, real estate investor sentiment remains relatively positive, despite continuing global economic uncertainty. While steady economic growth, rising incomes, and stable or increasing property values are all contributing to an overall sense of optimism, the report notes some concern among investors that prime assets in key real estate markets are becoming overpriced. For instance, capitalization rates across Asia remain more compressed than in many western markets, and yields for core office stock in cities such as Hong Kong and Singapore — in addition to Beijing — are returning as little as two percent.

“As a result, investors are expanding their horizons as they seek compelling investment opportunities. Some are looking at frontier markets such as Indonesia, while others are revisiting often overlooked capitals such as Kuala Lumpur and Bangkok, which explains the strong showing for these locations in this year’s report. Secondary markets such as Kowloon in Hong Kong and second-tier Chinese cities are also experiencing increased interest from international buyers. At the same time, core investment markets in many mature, western markets are seeing a surge in demand from newly formed Asian Institutional Investors seeking to capitalize on the post-global financial crisis corrections there.”

“China’s secondary cities are top-ranked in the survey’s ratings for Asian industrial and distribution projects, with almost half of those surveyed recommending acquisitions there. This no doubt reflects the need for improved logistics facilities in China’s western provinces as factories migrate increasingly away from established manufacturing sites,” commented K.K. So, Asia Pacific Real Estate Tax Leader, PwC. “And for retail properties, Shanghai and China’s secondary cities also feature strongly, again as witness to the rise of the mainland consumer and a government policy favoring consumer-led economic growth over the old model relying on infrastructure construction.”

Top Investment Markets for 2013 Overall, respondents were more bullish on the prospects for individual cities, awarding higher scores than in the previous two years.

The top five investment markets for 2013 are predicted to be:

1.Jakarta – Topping the rankings for both investment and development for the first time, Jakarta is described as a “surprising” choice given the city’s lack of investment grade stock and its economy, which while growing, lacks the enterprise, scale and infrastructure of its more developed neighbors.

However, Jakarta is seen by many real estate professionals as the most favorable emerging market in the region, with business transactions generally easier and more transparent than in other frontier markets such as Vietnam. The country’s interest rates and inflation are stable; the gross domestic product is growing steadily; and foreign direct investment grew by 39 percent in the first half of 2012.

2.Shanghai – Shanghai’s office market and retail market have proved mainstays for foreign funds looking to invest in Chinese real estate. Both sectors remain popular, given the city’s relatively user-friendly business environment, growing volume of institutional grade properties and historic market performance. However, in spite of Shanghai’s strong ranking, the city is not as appealing to foreign investors as it was a few years ago.

Prices are considered to be relatively high, the market has become saturated, and Chinese regulators have become less open to foreign investment, as they have increasing confidence in the ability of local real estate practitioners to finance and develop properties. While Shanghai will remain firmly on the radar of foreign funds with a mandate to invest in China, activity in the city will remain muted for the short term.

3.Singapore – Singapore retains its popularity among real estate investors who see the market as a safe haven offering solid, but not spectacular, returns that are underpinned by the city’s position as a global financial hub.

The city’s office market has recently run out of steam with significant amounts of new Grade A office space drawing tenants away from existing buildings, a problem which is compounded by a shrinking head count in the local financial sector. Rising vacancies and falling rents are causing problems for some international funds looking to exit the market.

4. Sydney – Sydney has seen a limited amount of new supply of commercial space in recent years, although a significant amount of office and retail space is in the pipeline for 2015.

A shortage of institutional grade property has continued to suppress sales volumes and kept prices buoyant, driving up total returns for office assets. Australia has absorbed more international real estate investment over the past year than any other country in the Asia Pacific region. Office assets remain a popular target for these funds and some analysts believe that foreign investors account for 30 percent of the transactions in the sector.

5.Kuala Lumpur – Kuala Lumpur is beginning to enter the real estate limelight, offering a stable market with good opportunities for opportunistic returns. While property sales slowed noticeably in most Asian markets during the third quarter of 2012, Kuala Lumpur was the exception. The long-term prospects for the commercial property market are deemed by many to be strong, due to the success of the government’s Economic Transformation Programme in drawing foreign investment.

Outside of the Beijing and Shanghai markets, interest in China’s second- and third-tier cites has grown quickly in recent years, the report says.

Chongqing, Tianjin, and Shenyang have become popular destinations with investors who have the opportunity to acquire prime city center sites that will have long-lasting value as core assets. In addition, internal rates of return of over 20 percent have made development strategies popular, especially given the overall lack of institutional-grade assets. PwC CN: News – China’s second-tier cities, together with Shanghai and Beijing, highly ranked in the Asia Pacific region, according to Emerging Trends In Real Estate® Asia Pacific 2013