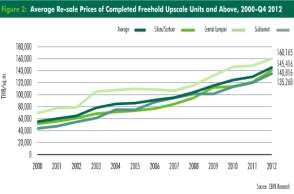 According to CBRE Bangkok Residential MarketView, In  this  quarter,  we  have  seen large  public  listed  developers such  as  Supalai  and  Sansiri coming  back  to  launch  high-rise condominiums  in  the  downtown market. The hottest condominium project  was  the  XXXIX  by  Sansiri.

This  project  was, according  to  Sansiri  sold  out within  days  of  the  launch.  The sizes of the one to three bedroom units  were  smaller  than  other super luxury projects at this price level.

Sukhumvit  soi  39  and Charoenrat/Sathupradit  in  the Rama III area are expected to be new  hotspots  for  downtown condominium  market.  Sukhumvit soi  39  has  a  close  proximity  to mass  transit  and  near  the  new Emporium, Emquatier.

Resale  prices  for  the  best completed  projects  continue  to rise. The best quality projects with good accessibility enjoyed greater price  appreciation.  The  steady increase in land prices especially along  main  roads  and  rising construction costs means that any new  development  in  the downtown  area  will  have  to  set prices above existing levels.

This is an extract from CBRE‘s Bangkok Residential MarketView Q4 2012.  To read the full document please click here.