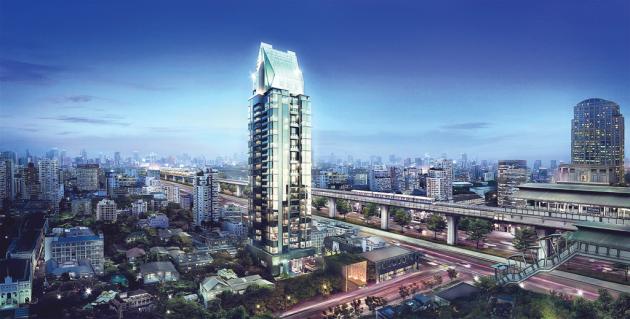 For some months, concerns have been voiced about the possible emergence of a bubble in the Thai housing market. To help prevent this from occurring, both the central bank and commercial lenders are taking a more cautious stance towards property lending, having learned the lessons of the 1997 Asian financial crisis.

The real estate market, particularly in Bangkok and the nearby region, has been attracting investment from both foreigners and a growing number of upwardly mobile Thais. Investors from regional centres such as Singapore and Hong Kong are being drawn to Bangkok for several reasons including restrictions (and limited development space) in their domestic markets, the steady rise of re-sale prices and the attraction of the city as a weekend getaway.

Thais, meanwhile, are buying property both to occupy and as a store of wealth, the latter option driven by currency and stock market volatility.

The real estate market, particularly in Bangkok and the nearby region, has been attracting investment from both foreigners and a growing number of upwardly mobile Thais.

The Bank of Thailand (BOT), the central bank, is keeping a close eye on the market, looking for signs of speculation, according to local press reports. In early May, Songtham Pinto, director of the BoT’s macroeconomy division, said that the central bank needed “to be cautious and monitor the situation very closely, and prepare measures to cope with any possible problem”.

The potential for a property bubble was likely among the factors that the central bank considered in the run-up to its decision to lower the policy interest rate on May 29, cutting it by 0.25 basis points to 2.5% in the face of a surprise contraction in the economy in the first quarter. The BoT had previously resisted calls for a reduction in the benchmark rate, including one from the finance minister, Kittiratt Na-Ranong, who had publicly dismissed concerns regarding an overheated real estate market.

The BoT has continued to take a careful position with regard to property prices. On June 3, the local press reported that the central bank had identified signs of speculation and that it would be monitoring the situation closely. However, BoT Senior Director Mathee Supapongse said that demand was slowing in Bangkok and its surrounding area. He also commented that loans for residential purchases fell in April from March, following tightening of lending regulations.

Indeed, banks are being more careful when extending credit both to developers and home buyers

Siam Commercial Bank, the largest mortgage lender with a portfolio worth upwards of BT400bn ($13bn), has said that it is focused on lending to just the top few property developers, and on the retail side, it has stopped offering zero-rate mortgages. CIMB Thai Bank and Kasikornbank, two other big lenders, have also reined in loans to home buyers.

For their part, developers maintain that there is no property bubble, pointing out that most activity is concentrated in the hands of a few large companies that are financially sound and have learned the lessons of 1997, and carry out extensive research and modelling before starting projects. Developers also claim there is oversupply in the market.

However, there have been price increases in some segments of the market, including resale values of upscale downtown condominium properties, according to a March 2013 report by CBRE Thailand, the local branch of an international real estate company. By the last quarter of last year, prices in this category reached BT148,219 ($4829) per square metre, up 7.1% year-on-year. The rise in resale values is significant, given the fact that Bangkok’s secondary market has traditionally been less lively, with Thais preferring to invest in new-build.

CBRE remains confident that demand for well-priced units in good locations – including on existing or developing public transit lines – will remain robust. However, the company adds that high standards are an increasingly important factor, saying that “the ability to deliver quality construction and finishing will be the key to success and a competitive advantage for the coming year”.

Preventing a real estate crunch will involve not only banks remaining prudent on the demand side, but developers ensuring that they meet market needs on the supply side. Actions so far suggest that industry players have learned from the past and will be successful in ensuring the stability of the sector.