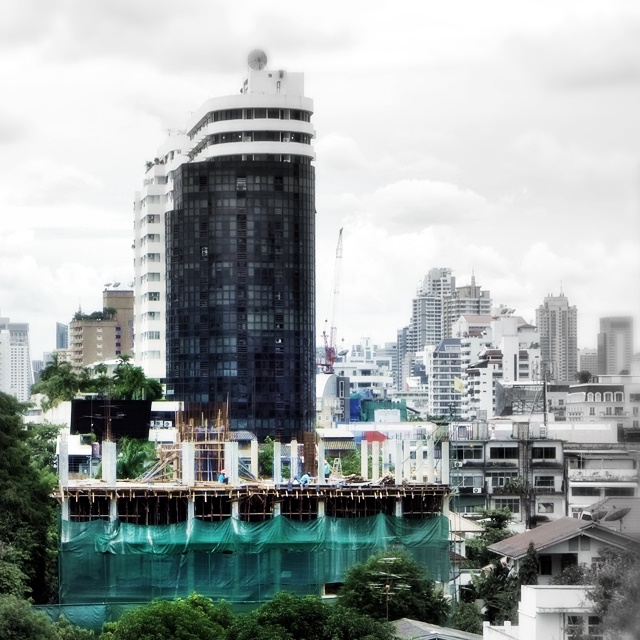 Some say there is no serious sign of a bubble in Thailand’s residential market but others are not so sure. Several areas in Bangkok and provincial towns are already experiencing a glut housing due to rapid growth during the past few years.

Making matters worse is the surge in speculation, seldom reported, but constantly active beneath the surface. At the same time, a shortage of contractors and construction workers are posing problems for developers. Clearly, that could be a sign of overheating.

For more than two years, our guide has warned of the growing traffic congestion from the Sukhumvit intersection at Onnuj and Sukhumvit 50 to Bang Na junction. Part of this is caused by overbuilding of condos on this stretch. In Sukhumvit 50 alone, a score of projects had come up in the past three years.

Some say there is no serious sign of a bubble in Thailand’s residential market but others are not so sure. Picture : Camilla Davidsson.

Scores more have followed since then along the corridor with the opening of new BTS Skytrain stations. Gridlock traffic from early morning till night has forced many residents to sell their homes and move further away. The Government Housing Bank’s researchers at REIC, an agency that surveys the property market recently said the area faces an acute oversupply.

The signals that give away the seriousness of the problem have come from the ground. Just like the signals that warn of a stock market crash, such as when taxi driver talk about their portfolios and the shoe shine boy giving stock tips, the best indicators come from the builders themselves. One developer who started early in Sukhumvit Soi 52 with four projects has now left the area to build in Khao Yai.

If things are so good, why depart? Clearly the sense of a saturated market and intense competition bodes ill for speculators who had bought in the hope of making a quick profit. Sales have been sluggish for months. To make matters worse, many punters have raised their prices. A studio now sells for almost Bt3.5 million, equal to that of downtown projects. Banks are also cautious, if not nervous, about giving Bt3 million plus to buyers of studio units. If a crash comes they will be holding expensive studios, one reason why the 1997 crash sank so many banks.

While the condo crash is some ways away, the normal gestation period of a meltdown usually takes five years. We are probably midway towards the next one. Why does a property crash take a long time? Like the seven stages of death, punters go through a number of stages before they capitulate. The stages are shock, denial, anger, bargaining, guilt, depression and finally, acceptance. We are somewhere in the middle. Denial seems to run the longest course with punters rejecting there is a bubble. Ultimately the cost of paying for a condo they can ill afford and the probability they would be stuck with it forever sinks in. As punters discover they cannot rent them for outrageous amounts or resell it, depression sets in. This could last a while.