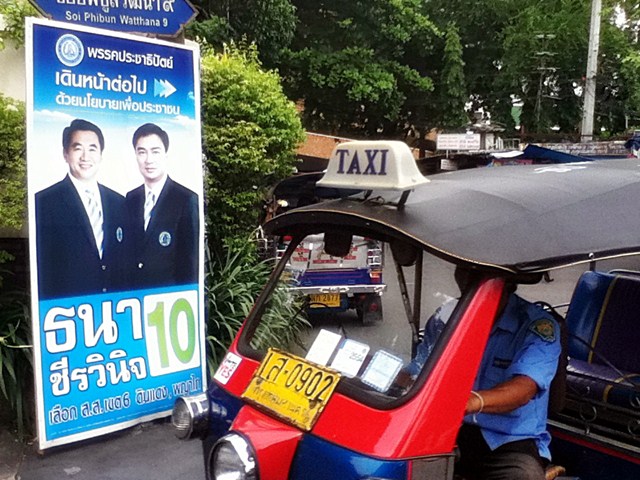 Thai stocks on Monday skyrocketed, rising 4.7% with a trading turnover of Bt63,110 million after the opposition Pheu Thai Party won Sunday’s election by a clear majority.

The Pheu Thai Party won a majority of the 500-member House of Representatives in the general election on 3 July 2011, and it has announced the formation of a new coalition.

According to unofficial results of the election, the Pheu Thai Party came first in the election, winning 265 seats, while the Democrat Party ranked second, gaining 159 seats.

Thai stocks on Monday skyrocketed, rising 4.7% with a trading turnover of Bt63,110 million after the opposition Pheu Thai Party won Sunday's election by a clear majority.

The Election Commission of Thailand has postponed its announcement on the election results from July 4 to July 5.

As the largest party, Pheu Thai has the mandate to form the next government. The party has invited four smaller parties, comprising Chatthaipattana, Chart Pattana Puea Pandin, Palung Chon, and Mahachon to join the new coalition government.

Meanwhile, Democrat Party leader Abhisit Vejjajiva on July 4 announced his resignation as party leader, saying that he must show responsibility as his party gained fewer seats than in the previous general election in December 2007. In the previous election, the Democrat Party won 165 seats.The Stock Exchange of Thailand (SET) composite index rose 48.80 points to close at 1,090.28.

Foreign Investors are back

Thai bourse was previously sluggish, for traders were waiting to see the country’s situation.

Association of Securities Companies’ chief executive Pattera Dilokrungthirapop said that Thai stocks soaring nearly 5 per cent was because traders were reassured by the election that polical stability would return as a result of Pheu Thai Party’s landslide victory.

Ms Pattera said all eyes are now at the new government’s economic team and its policy which is yet to be unveiled, as some foreign investors have contacted the association for more information for their investment decisions.

Stock Exchange of Thailand (SET) President Jarumporn Chotikasathien said the Pheu Thai’s economic policy focuses on the stimulation of domestic consumption and investment, with the capital market playing an important role and its development will be continued.

Suchart Thadathamrongvej, advisor to Pheu Thai economic team, disclosed on Monday that Yingluck Shinawatra will lead the new government’s economic team by herself as she has experience in the business field.

Mr Suchart said the Pheu Thai party will proceed with implementing its policy delivered in its election campaign immediately after Ms Yingluck takes office; for instance, with credit cards for farmers and a rice mortgage scheme in replacement of the outgoing government’s price guarantee scheme.

As for raising the daily minimum wage to Bt300 per day, Mr Suchart said it will take some six months to put the policy into action under the procedure of a tripartite committee, while the scheme of income tax reduction for entrepreneurs to help reduce the capital cost will begin next year.

Kasikorn Securities’ assistant managing director Kavee Chukitkasem said Thailand has not seen such the sharp rise of share prices for almost a year as investors welcomed the clear picture of the post-election political situation and the formation of a new government. In addition, foreign investors are also returning to the Thai bourse.

In Sunday’s election, the Pheu Thai Party won 265 out of 500 seats, while the Democrats snared 159 seats in the lower house of parliament. Ms Yingluck had earlier announced her 5-party coalition government of 299 seats, while she is set to become Thailand’s first female prime minister. (MCOT online news)

“We have seen a lot of the pre-election policies very pro-consumption, pro-fiscal spending, boosting growth,” he said. “We’ve also seen a large increase in minimum wage – this is probably one of the largest increase in the past 10 years.” Click here for full interview

The Pheu Thai party party – led by Yingluck Shinawatra, the sister of former Thai prime minister Thaksin – has pledged to lift minimum wage by about 40 percent to 300 baht, and up to 1,000 baht by 2020.

Thailand’s auto sales drop 10% in May