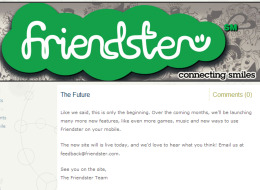 Do you remember Friendster? Several years ago, it was one of the hottest startups and social networks around, long before MySpace or Facebook hit the scene. Google even tried to acquire it back in 2003. But while it’s on the decline in the western world, it’s a powerful force in Asia, where it is one of the most popular Web sites in nations such as the Philippines, Malaysia, Singapore, South Korea and Indonesia.

According to Reuters, the social network is not only moving to lock in its Asian audience, but it’s about to get a new Asian owner as well. Fresh off a redesign aimed at its Asian userbase, Friendster will be sold by the end of the year to an Asian buyer for an amount north of $100 million.

The company, which has been private since its inception in 2002, was founded by programmer Jonathan Abrams and received investments from several venture capital firms totaling around $50 million.

Now it’s led by CEO Richard Kimber, a former director of Google’s South Asian affairs. It’s no surprise to us that Friendster’s focus on the Asian market would eventually result in an Asian owner. Friendster, while mostly ridiculed and forgotten in the U.S., is still one of the world’s largest Web sites and has room to grow within Asia. Considering its rapid decline in the U.S., Friendster could have done a lot worse. Did you use Friendster back in the day or are you a current user? We want to hear your Friendster stories (or ridicule) in the comments. More About: asia, friendster

RUMOR: Friendster to Be Sold for $100+ Million